Intel is prefacing the start of the Computex event in Taipei this year with the announcement of a special edition 9900K, called the i9-9900KS. This CPU will be similar to the sort of limited edition 8086K that was released last year, effectively being a pre-overclocked 8700K.

The 9900KS is making headlines because it’ll feature a 5GHz all-core turbo, rather than just a single or dual-core turbo. This turbo puts it 300MHz ahead of the 9900K all core turbo. The 8-core CPU has not been given a release date or price yet, but it’s expected to launch some time later this year.

In addition to this new CPU, Intel provided some preliminary information on its upcoming Ice Lake architecture launch. These CPUs will be launching for the mobile markets first, and will be Intel’s first consumer launch of its 10nm process CPUs.

Intel concentrated on how its 25 Watt variant compares to AMD’s current gen R7 3700U mobile chips of the same power profile, matching or beating AMD in nearly all tests. There was also a comparison to Intel’s previous gen mobile CPUs as well, highlighting many of the performance boosts people should expect. 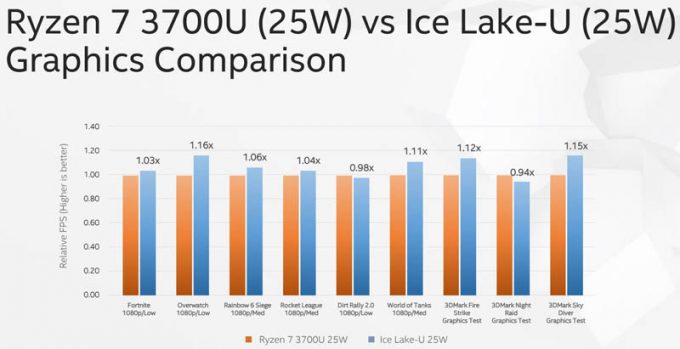 A lot of the performance gains for Ice Lake will be seen in the GPU side of things, something that Intel has been sorely lacking for a number of years now, so much so that it started to use AMD GPUs in some of its higher-end chips. While a better GPU architecture is included, there is also additional software support for DirectX 12 variable rate shading (VRS). This is a type of shading technique that drops the render quality in places that are not easily seen, such as with blur effects and long draw distances behind fog. VRS will be used in VR for foveated rendering when paired with eye-tracking.

More details of Ice Lake and the i9-9900KS will be released later in the week, as today was more of a teaser as to what to expect. There’s not much else to say until Tuesday, but Computex 2019 is going to be interesting – especially with AMD’s opening keynote that signifies the start of Computex tomorrow.