The latest batch of 10th-gen Intel Core processors have arrived, coming to us in the form of Comet Lake, and with core/thread counts going up to 6C/12T. These chips are still built on a 14nm process, but should offer considerable performance benefits over the previous generation for their intended devices – productivity notebooks. 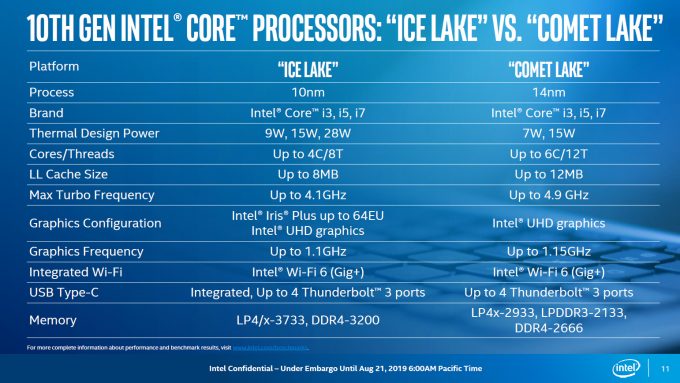 This is the third 10th-gen launch Intel has had in the past couple of months, so we’d understand if you’re finding yourself a little confused with the differences. Currently, a seriously alluring architecture is the 10nm Ice Lake, but those models are only available in up to 4-core SKUs for the moment. While we’re happy to see Comet Lake arrive, we’re simply dying for Ice Lake desktop counterparts to come out – but alas, we shall continue to wait, and continue to be teased by these other releases. 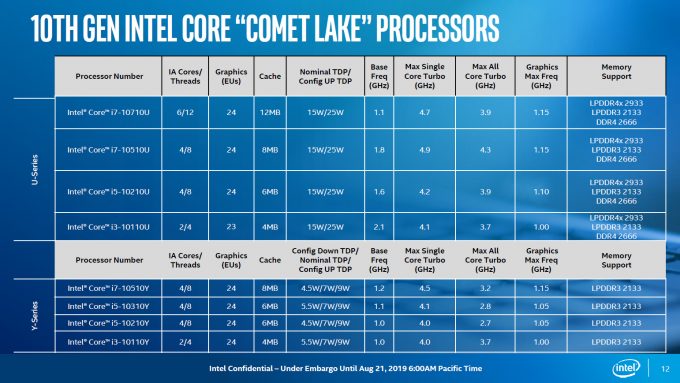 Comet Lake’s top SKUs are 15W, but can be configured to go up to 25W, which we’d imagine vendors producing workstation-esque machines would opt for. While we’re not seeing the same sky-high supported memory speeds of Ice Lake, Comet Lake offers support at up to 2933MHz. All of the chips include a UHD graphics processor, so minor graphics gains could be expected vs. Ice Lake, which should have huge gains.

In the slide below, Intel touts 16% improved performance (based on SYSMark) with Comet Lake over the previous-gen, and 41% better for Office 365. In a bit of a misleading note, it concludes those boosts with the tag “without compromising battery life”, but as Joel Hruska from ExtremeTech astutely noticed, the 1 and 2 footnotes are 25W vs. 15W comparisons, while 3 is 15W vs. 15W. Despite that, it’s made to appear that all three comparisons relate to one another. 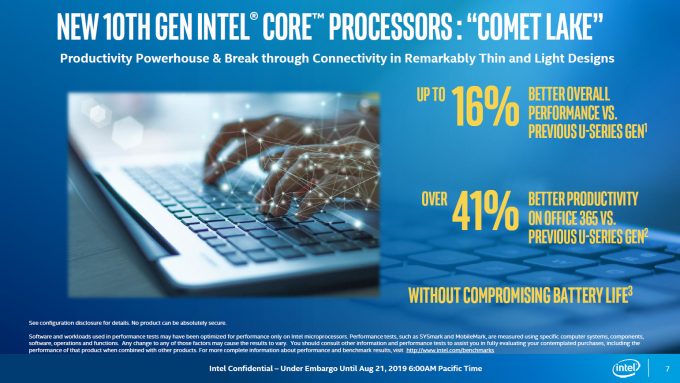 Marketing sucks, but it’s obvious that Comet Lake will offer a bit of a boost over the previous-gen, especially with 6-core models now being available in these smaller form-factors. And, the Wi-Fi 6 inclusion sure doesn’t hurt things either (nor does the 4.9GHz peak Turbo on the i7-10710U).

An unfortunate thing about this launch is that it’s going to take another couple of months before we see laptops hit the market with them equipped. Intel is simply saying that the “holiday season” is when we’ll see them.