Following on the launch of the first 13th-gen Core “Raptor Lake” desktop processors a few months ago, Intel has taken full advantage of the ongoing CES 2023 event to debut a slew of new models for both desktop and notebook. To kick things off, let’s take a look at the new “HX” mobile SKUs which target gaming and workstation: 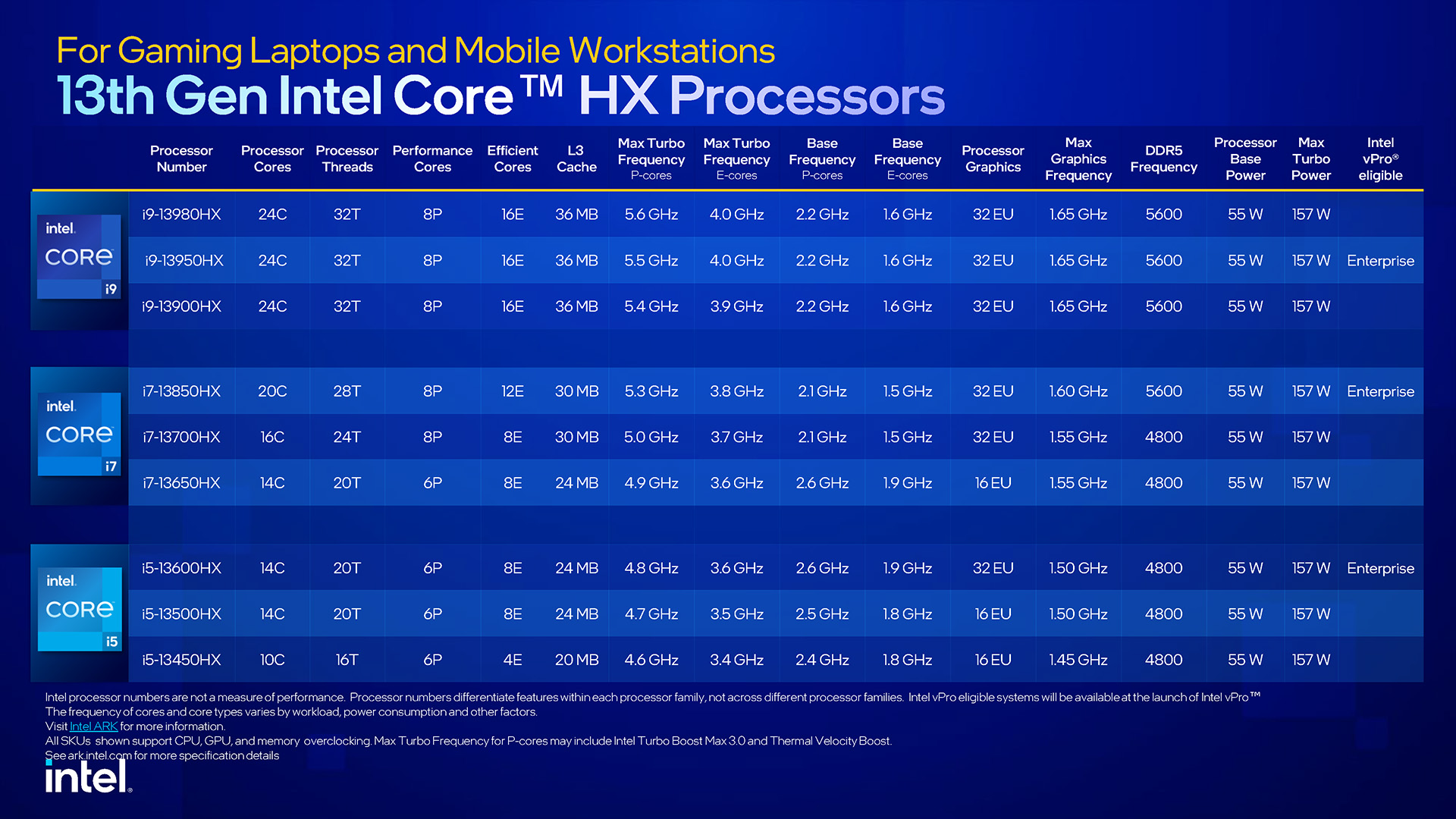 One of the most notable takeaways from this 13th-gen lineup is that Intel is now offering 24 core options at the top-end, with the i9-13900HX, i9-13950HX, and i9-13980HX. Versus the previous-generation 12900HX, Intel’s doubled the number of “efficient” cores in these new SKUs, making the platform all-the-more potent. The amount of cache has also increased between generations, from 30MB to 36MB, and just like with the desktop parts, the Raptor Lake mobile chips increase DRAM support from DDR5-4800 to DDR5-5600, while still having DDR4 options available.

Chances are you’re not going to require 24 cores in a gaming or creator notebook, so Intel has you covered with (many) other models to choose from, all ranging between 16 and 28 threads. Interestingly, not all of the SKUs support DDR5-5600; in this particular selection above, the i7-13700HX and under are held back to DDR5-4800. Despite all of the core, clock, and memory differences across these models, Intel specs them all at 55W base, and 157W max. 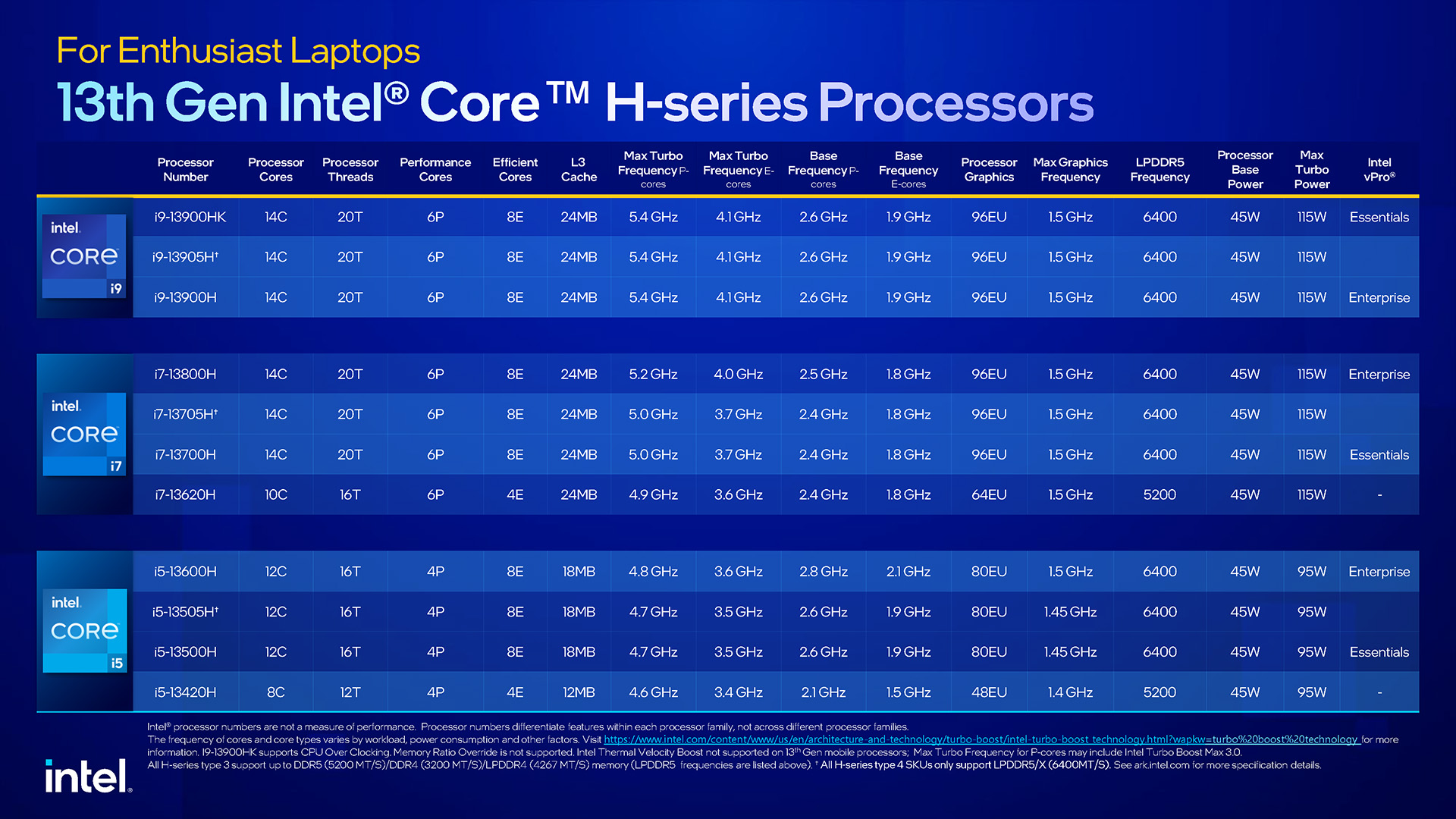 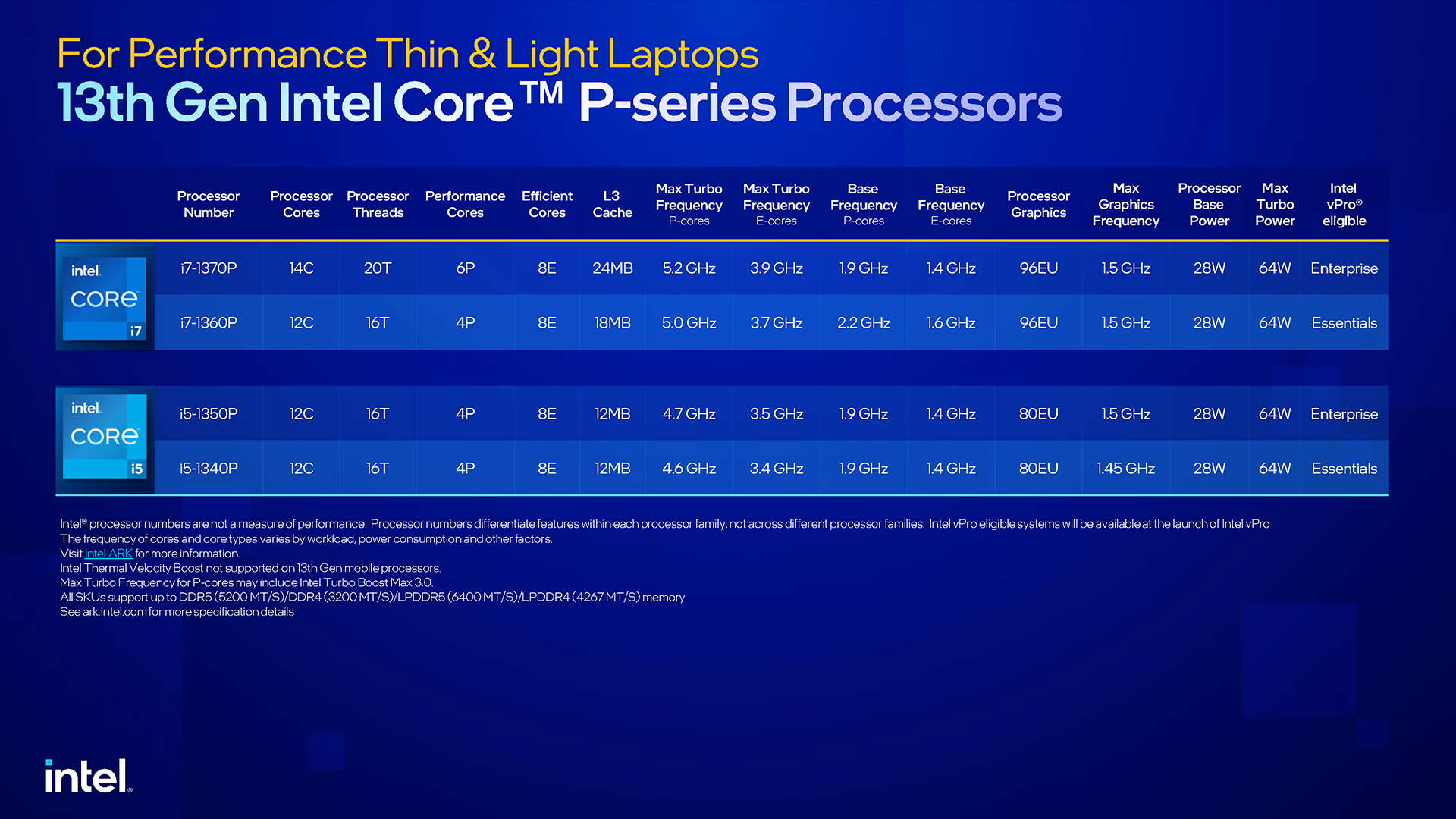 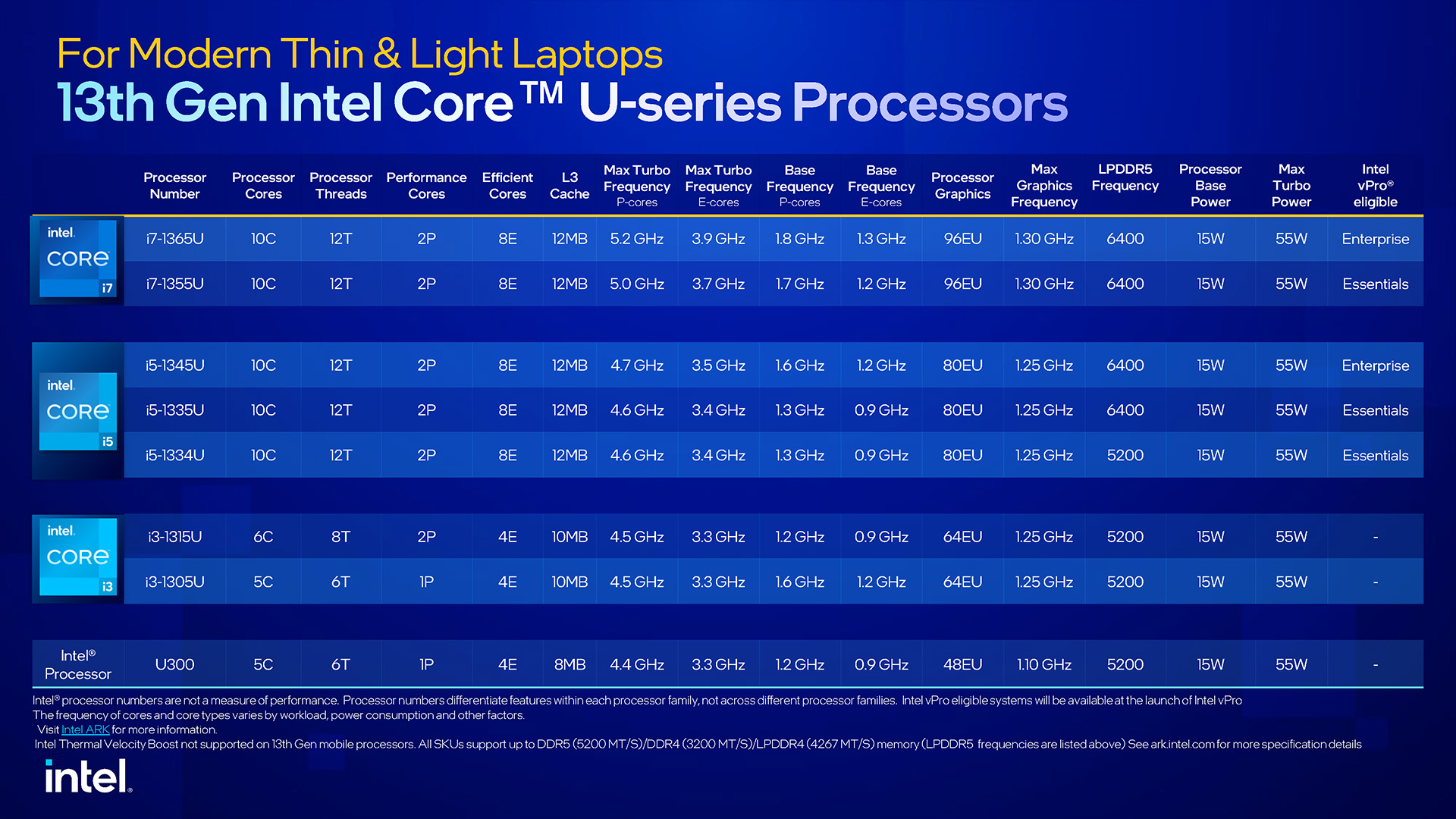 Also worth noting is that Intel is also debuting a set of SKUs for entry-level notebooks, with 4-core/4-thread and 8-core/8-thread flavors available. At the top-end, the Core i3-N305 will peak at 15W power, while the 4-core options peak at 6W. Intel is heavily targeting these options at education, where cost is sensitive, but where users should still be able to take advantage of features like video conferencing. 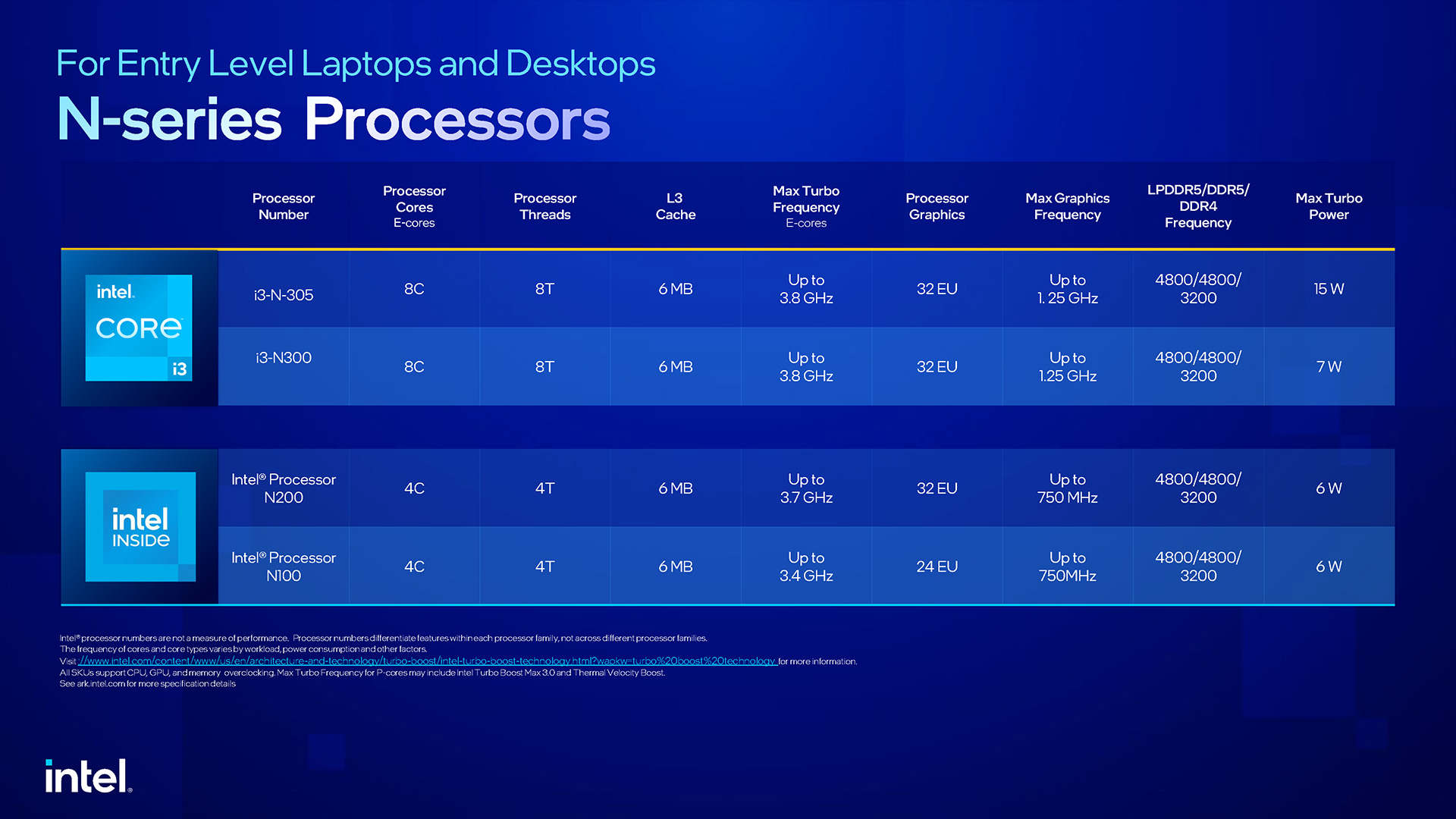 If you’re finding yourself in awe at the sheer number of mobile models Intel’s just introduced, there’s a lot more where that came from. Here are Intel’s newest 13th-gen Core desktop SKUs: 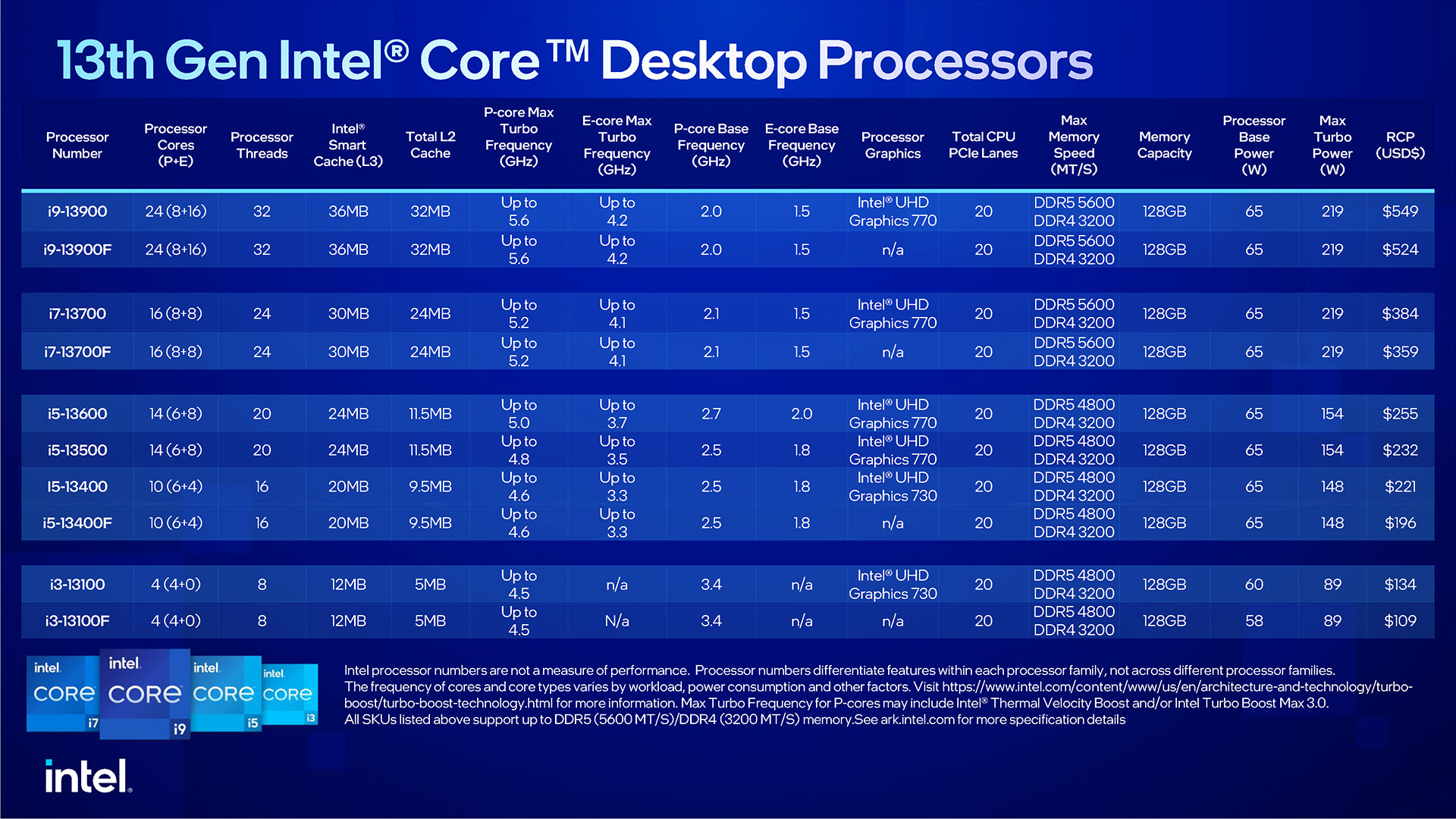 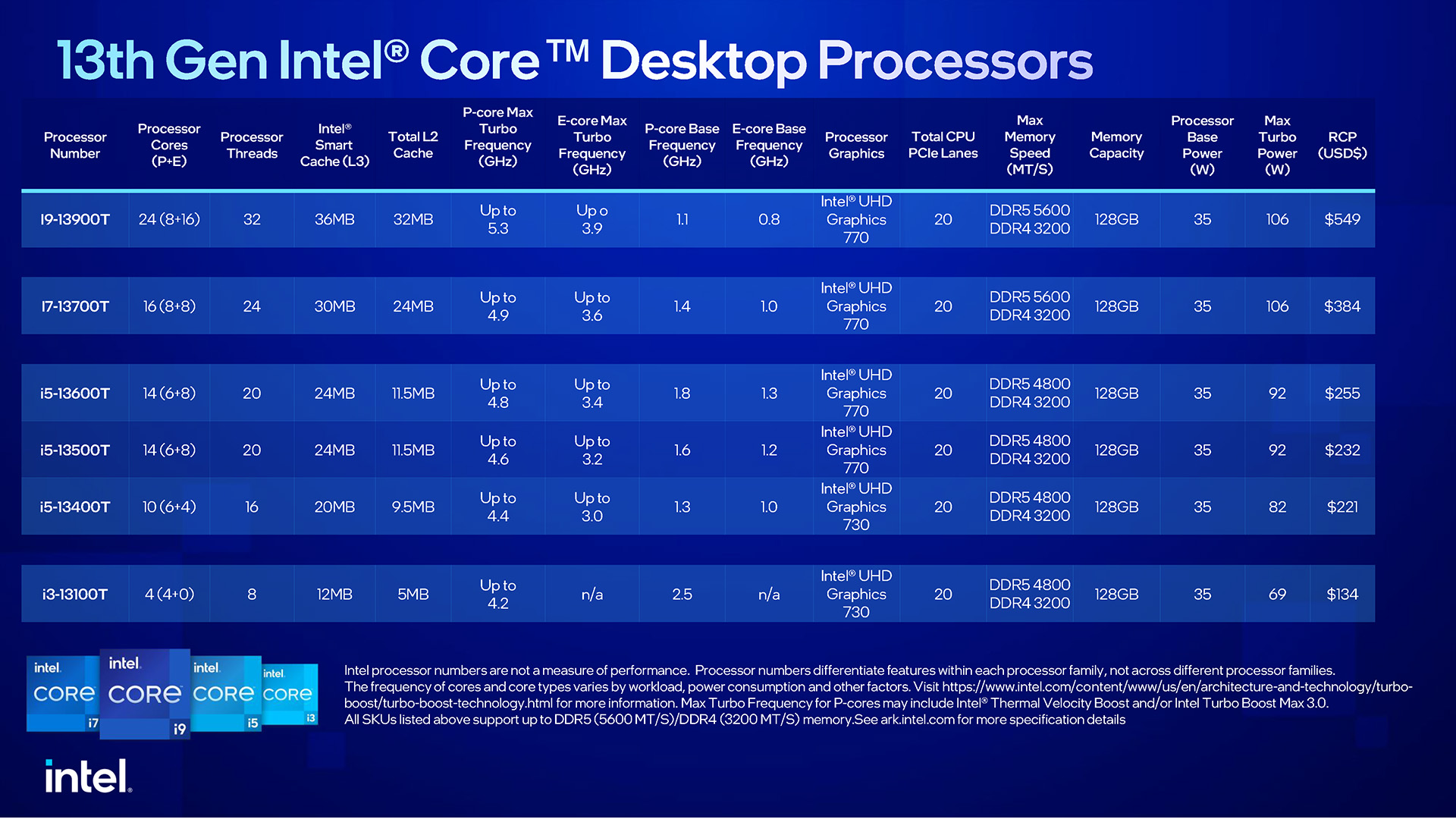 For those not planning to overclock, the non-K series offers a bunch of options depending on the performance level you’re after. Almost all of these chips are spec’d at 65W TDP, although the top-end options can burst beyond 200W at max push. If you’ll never use integrated graphics, you can potentially save some money by going with one of the F SKUs.

For those wanting a new Intel chip for a low-power PC, the T-series offers a number of SKUs that all have a 35W TDP, and most of which peak at around 100W.

So there you have it – a massive (and almost obscene) collection of current-gen Intel CPUs to choose from, either for your new notebook or desktop.