We may still be waiting on Intel’s gaming-bound Arc desktop GPUs to arrive on these shores, but the company’s made it clear that it plans to thoroughly cover the entire market before long – from home to enterprise. At SIGGRAPH, the company has just unveiled Arc GPUs that focus on another avenue: workstation. This announcement brings one mobile GPU, along with two desktop GPUs, all of which are branded as Arc Pro.

For the desktop, Intel is going to be offering both an Arc Pro A40, and Arc Pro A50. The smaller of the two, A40, is a single-slot low-profile card that doesn’t require a power connector, while the A50 is a bit larger, foregoes the low-profile design, and fills two slots. It’s not clear if the A50 has a power cable requirement, as that side of the card is not shown, but at 75W, we’d imagine it might accept one six-pin. 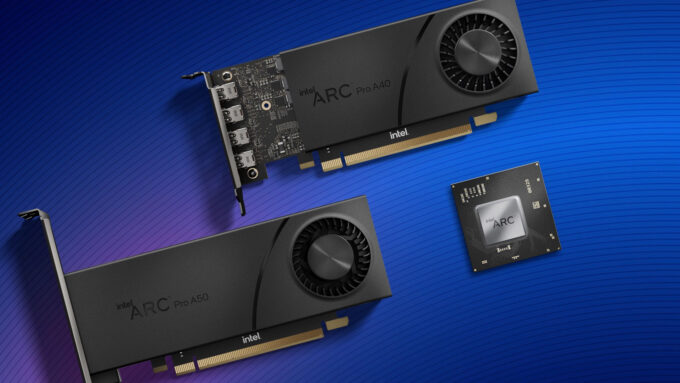 On the Arc Pro landing page, it’s noted that the A50 has “more TFLOPS” than the A40, but the comparison specs page lists no difference between them, aside from the increased TDP of the A50. We shot off a request to Intel to get clarification on the discrepancy.

Given the similar specs on the above-linked page, we’re not entirely sure if the rest of the specs are correct, so we’re leaning towards waiting for official word. As these new GPUs do tend to align better with Arc 3 than a higher-end series, it seems likely both SKUs include 6GB of GDDR6 memory, spec’d at 192GB/s. Ultimately, such specs are not going to tell us too much until we can compare Arc cards against the competition.

With its built-in AV1 encoder, these Arc Pro cards could be really alluring for the content creator on a budget. The 6GB framebuffer should be sufficient for most 4K workloads, with any real limitation being tied to the overall performance, if a number of GPU accelerated effects are applied.

At this point, we’re just eager to get our hands on Arc at all, and begin experimenting with both gaming and creative workloads. While it’s not going to be a surprise that Arc Pro will include additional workstation-focused optimizations than the gaming counterparts, based on what we see from the competition, we’d imagine regular Arc won’t hold much back from creative workload efficiency. Time will tell!