CES isn’t always used as a launch platform for a mainline processor series, but Intel has taken advantage of 2021’s digital event to unleash a deluge of new models – largely focused on mobile. The releases include those revolving around the 11th-gen Core vPro and Evo vPro platforms targeting business, and 11th-gen H-series processors laser-focused on gaming.

Arguably, the H-series used for gaming is the most alluring release to us, as the chips are built around Intel’s 10nm process and include Xe-LP graphics inside. As 10nm SuperFIN chips, it may not surprise you to learn that all of these H35-series chips are so far 4-core / 8-thread, but the slide deck we were provided gives hints that 8-core / 16-thread parts are “coming soon”. Oh, we sure hope so.

Here’s a run-down of the three H35-series processors Intel is launching today:

You will note that all three of these models include the same amount of cache and have the same at-load TDP rating. Only the i7-11375H (Special Edition) is designed to peak at 5GHz, something that would assume thermals are kept under control. It’s important to note that these CPUs are destined for “ultraportable” gaming notebooks, and we’d imagine both forthcoming 8-core 10nm chips would break into slightly larger notebooks.

PCIe 4.0 has made it to Intel with this platform, and up to LPDDR4-4266 memory is supported, something that could benefit the 96 core Xe-LP GPU found under-the-hood. Another nicety is that the platform includes Intel’s new Killer Wi-Fi 6E AX1675 2×2 for cutting-edge wireless speeds. The platform also supports Intel’s Optane H20 memory. 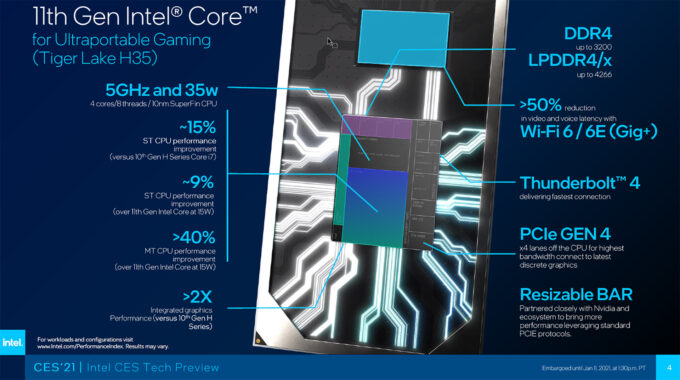 As you’d expect, CES will have many notebook vendors offering support around this new platform, including ASUS, Acer, MSI, and Vaio. Intel says in all, 40 designs exist so far, and will release to market in the first half of 2021.

The slide above has a couple of features worth drawing a bit of attention to. Most of us only learned of “resizable bar” with the release of AMD’s RDNA2 ‘Big Navi’ Radeon graphics cards a few months ago, and already Intel has it as a feature on this Tiger Lake platform. Will it make a difference? With a low-power platform like this one, we’re doubtful, but we’re also doubtful it will be a detriment, so it’s nice to see support already enabled. We at least know now that this feature will continue to be seen with future platforms.

On the performance front, the new top-end chip boasts a 15% boost to single-thread performance, vs. 10th-gen H-series Core i7, as well as a multi-thread bump of 40% vs. the 11th-gen 15W Core mobile platform.

While four core processors are not usually at the base of a gaming notebook, the fact that this H35 platform is “ultraportable” helps make up for that fact. We look forward to seeing more notebooks in action, and especially put to a good test. We also can’t wait for the 8-core versions of these chips, but we guess that’s why they say patience is a virtue.