There’s so much news of Intel’s 10th-gen Core series processors floating around, that it’d be easy to assume that they’re already available on the market. That’s not the case, but there seems to be little that’s been kept secret. Earlier this week, there were a bunch of engineering samples that went up for sale, offering those who made the plunge early get a chip that’s about 15-20% faster than the Core i9-9900K.

If you find yourself offered one of these chips, you may want to stay away, unless you really want it. The fact that ES chips do not include a warranty means that you will be out-of-luck if something goes wrong, although in our experience, we’ve primarily used ES chips in our rigs, and have never had a CPU die on us once in fifteen years. Still – warranties are nice to have.

As the 9th-gen series did, the 10th-gen series is going to increase the core count with the top-end chips, giving the i9-10900K ten cores, rather than eight. That in itself is what’s going to be responsible for most of the performance uplift, but even though the 9900K/S boasted such high clock speeds to begin with, it appears these next chips might boost just a bit better, with 5.2GHz being a prospect on a single core. 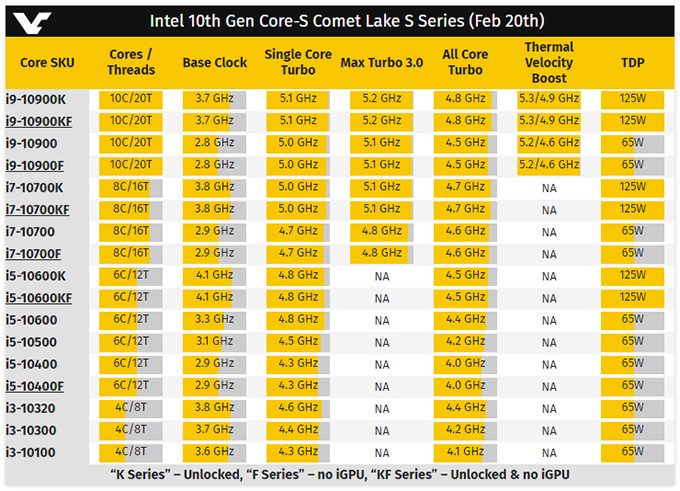 Over at VideoCardz, the entire 10th-gen lineup is listed, based on leaked information. Despite the top-end ten core offering more cores and still super-high clocks, Intel’s TDP remains at 125W, like the 9900KS. What’s also interesting is the Core i7-10700, sporting eight cores. techPowerUp relayed a Cinebench result leak, which puts the 10700F (no integrated graphics) at around the same spot as AMD’s Ryzen 7 3700X. With Zen 2’s launch, AMD’s Cinebench performance jumped quite a bit, allowing AMD to beat out Intel in both the single- and multi-thread tests. The fact that Intel has once again caught up with the same core count is good to see.

We reached out to Intel to inquire about this next-gen launch, but haven’t heard back as of publishing. We don’t expect to have much information provided, given how tight-lipped Intel normally is. But, with the fact that the chips are hitting the market via engineering samples, and the fact that we’re being inundated with leaks, it feels likely that the official launch isn’t too far off.