Intel’s Arc A380 To Land In USA And Canada This Week, Intel Celebrates With Bug Fix-filled Driver

We wrote last week of the expectation that Intel’s first desktop-bound Arc GPU, A380, would soon launch in the USA – as in, really soon. Well, fast-forward to the present, and it does appear that availability is happening this week, with Newegg showing an ETA of August 23. The $139.99 USD price remains unchanged from last week, as does the two-per-customer purchase limit.

As for the USA’s neighbors up north, we figured that a listing for Canadians couldn’t be too far behind, and lo and behold: Newegg Canada‘s website reflects the same ASRock Challenger model today, with August 26 pinned as the availability date. The Canadian price comes in at $199.99 CAD, which is an 8% premium over current currency conversion prices ($1 USD = $1.305 CAD). 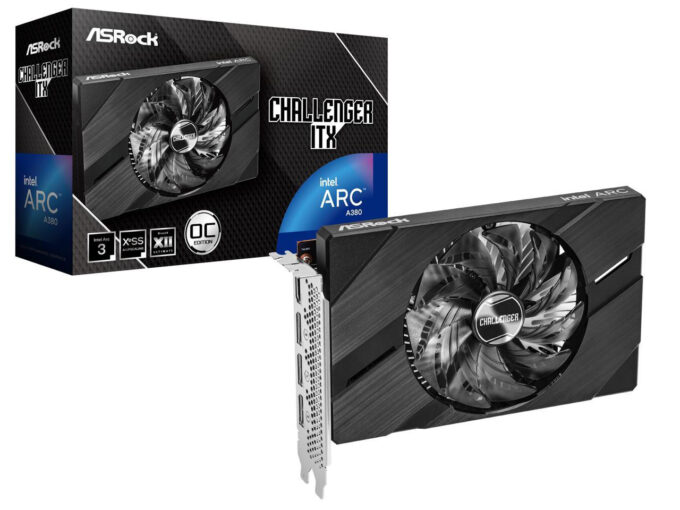 With that, it appears that Intel’s Arc GPUs for desktop have launched – or at least can be considered so in the days ahead. Admittedly, this does seem to be happening without much fanfare. That extends to the fact that there doesn’t appear to be launch-day reviews planned, unless someone managed to acquire a card on their own ahead-of-time. We wager Intel is more eager to have the initial blast of reviews revolve around one of the higher-end models – either A750 or A770.

Nonetheless, ahead of this launch, Intel’s VP and GM for the Visual Compute Group, Lisa Pearce, took to the company blog to discuss some burning questions about Arc that have been bubbling through the web the past few weeks. After reading, one thing becomes clear: Intel didn’t want to design Arc with a huge focus on legacy support, preferring to instead concentrate on modern technologies. That means in some cases, Arc is not going to perform as well in certain titles as the competition, even at the same performance-level.

One example is with DirectX. Only the latest version of the API, 12, is fully implemented to deliver the highest-level of performance. The same applies for Vulkan. As for DX11 and earlier, translation layers in DirectX 12 are used, a move that introduces overhead that inevitably reduces performance. That’s unfortunate on the DX11 front, since some new titles are still designed around the API, but older titles, such as those built on DX9, will hopefully run “well enough” despite the overhead, considering their age.

If you check out the Newegg link from earlier, one of the bullet-points might stand out: “Intel Arc Graphics products require a Resizable BAR enabled system.” This is again another deliberate feature with caveats. By requiring reBAR, Intel’s designed its architecture around larger memory transactions, with the downside being that older platforms that don’t support reBAR are not suggested for Arc use. Intel seems to be banking on the fact that most Arc purchasers out-of-the-gate will adopt a GPU for their new rig, rather than upgrade their old one.

While it might not be quite as exciting as hardware, Pearce also tackles software, and it’s for good reason. Recently, Gamers Nexus took a look at an imported Arc A380, and was appalled by the number of bugs found with the Intel driver, and its Arc Control component. Intel says that 43 bugs were filed as a result of this video, and most of those have been squashed in the most recent driver. This will lead to the inevitable question of how so many bugs went undetected within Intel after all of this time, but it’s at least nice to see real progress being made.

The final question Pearce tackles is support for Variable Refresh Rate, and whether it exists. The answer, fortunately, is “Absolutely!”. That’s another topic that Intel’s Ryan Shrout previously tackled.

All of this aside, while most of the Arc focus seems to be revolving around gaming, we’re interested in taking a look at it from a creator / workstation perspective. Intel has many partnerships with creator-type developers, such as Topaz and Blender, so we’re hopeful for a good experience with those. Time will soon tell.