KDE 5 is Here: Introducing a Cleaner Frontend & An Overhauled Backend

A mere two weeks after it gave us a stable version of Frameworks 5, the KDE development team has gone ahead and finalized its KDE 5 rollout with the release of the Plasma 5 desktop environment.

Since this is a landmark release for KDE, I feel compelled to tip my hat to the last one before diving into what’s new. When KDE 4 first hit the scene over six-years-ago, I didn’t like it much at all. I remember harping on the fact that the KDE development team must have felt that aesthetics were more important than usability. Looking back, I can’t help but laugh – after all, GNOME 3 brought that complaint to the extreme when it was released three-years-later.

But I digress. I didn’t actually begin using KDE 4 fulltime until 4.3 came out, and I know I’m not alone. That version in particular righted a lot of the wrongs of the previous versions, and became the first truly attractive KDE 4 release for a lot of people. While there are many desktop environments out there, I’ve always called KDE home, and after having a look at KDE 5, I don’t think that will be changing anytime soon. This release simply looks fantastic. 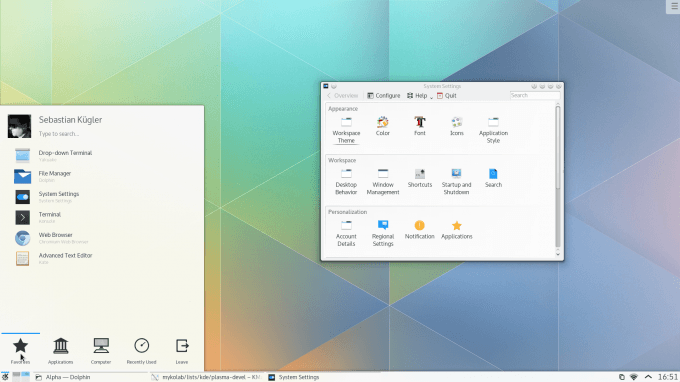 Plasma 5’s default theme is Breeze, and as the above shot highlights, it’s super clean in design. The fonts look crisp, as do the icons. With the flat aesthetic and the obvious attempt to use as few lines as possible, there’s no denying that KDE 5 is a modern desktop. If the light color scheme isn’t quite your cup of tea, you’ll be happy to know that a dark version is included as well.

It’s impossible to glean from simple screenshots, but a major feature of both Frameworks and Plasma 5 is performance improvements. I haven’t been able to give KDE 5 a try up-to-this-point, but from what I’ve been reading around the Web, the differences in performance can sometimes be stark. Part of this owes its thanks to being built on top of OpenGL and OpenGL ES, which offloads a lot of the work that the CPU usually deals with onto the GPU.

KDE 5 isn’t going to cause users of KDE 4 much or any confusion. It looks like KDE, and it feels like KDE – it’s that simple. That said, there are a number of notable feature updates, although it might require using the environment to notice most of them.

In the video below, created by KDE’s Sebastian Kügler, a couple of neat features are highlighted – not all are new, but some might not have been known by everyone. One update that has me a bit excited is an update to the KDE Classic Menu. In KDE 4, this menu looked like it was just dropped in from KDE 3.x, and since I care about aesthetics a fair bit, I’ve stuck with the current kicker. Well, in KDE 5, it’s been overhauled; it’s actually built with the modern environment in mind, and it looks great.

Another new feature is a pane on the left that can be spawned which shows all open applications on that particular desktop. This implementation reminds me quite a bit of the app pane in Windows 8, but here, actual desktop apps are those shown. In a way, this is merely a different kind of alt-tab, but those who have many windows open may appreciate it.

As you’d expect with a new landmark release, KDE 5 brings us a brand-new login / lock screen which carries on the updated look of the desktop itself. 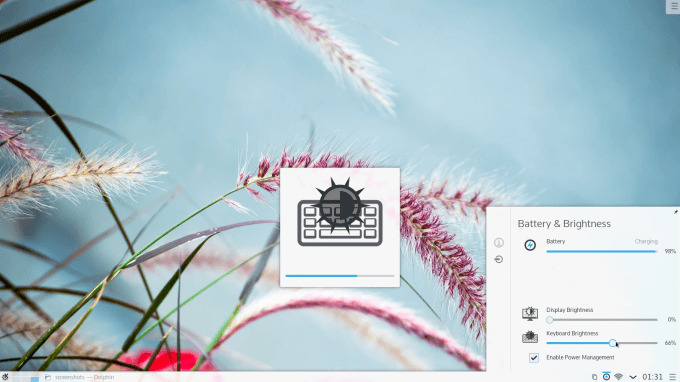 I almost feel like a hypocrite for enjoying KDE 5’s look and feel so much, because that was basically my reason for bashing KDE 4. I think the difference here is, KDE 4 has evolved to become an extremely solid desktop environment, and as that’s carried-over to KDE 5, we’re simply getting the best of both worlds here: A stable, great-looking desktop. Sure, there are going to be bugs, but we’ll have to wait and see how many of them decide to creep up before KDE 5.1. Personally, because I’m adamant about having a stable system, I’ll likely wait until that particular release hits the Web before migrating. Of course, I say that now. My patience can sometimes decide otherwise.

If you’re interested in giving KDE 5 a test, you can head on over to the packages page to get instructions on how to access the current version in your distro of choice. Some distros are of course going to make the upgrade process easier than others, but up-front, know this: You cannot have KDE 4 and KDE 5 installed at the same time. Furthering that, you can’t simply “upgrade”. Instead, you should first uninstall KDE 4 entirely, and then install the KDE 5 packages.

It should also be noted that just because the KDE development team is focusing on KDE 5, KDE 4 is still going to be supported for some time. After some perusing of the development site, I wasn’t able to lock down an “end of support” date, but there is a scheduled release for August 20th, which will update Applications and Platform. It can be expected that all future KDE 4 releases will include bug fixes, and few or no new features.