Latest Destiny 2 Season Launches, But Not Without Some Troubles

In January, we wrote about the ever-growing distaste for the direction Destiny 2 has taken over the last year, especially with regards to releasing content that forces players to jump in because it will be arbitrarily removed from the game later. At that time, players still had a new season to look forward to, so it was easy enough to look forward to that, and hope for the best.

Well, Season of the Worthy has just launched, and it didn’t even take an single day before the community had some things to complain about. Some might be unwarranted, but some definitely are. But first, here’s what the new season brings: 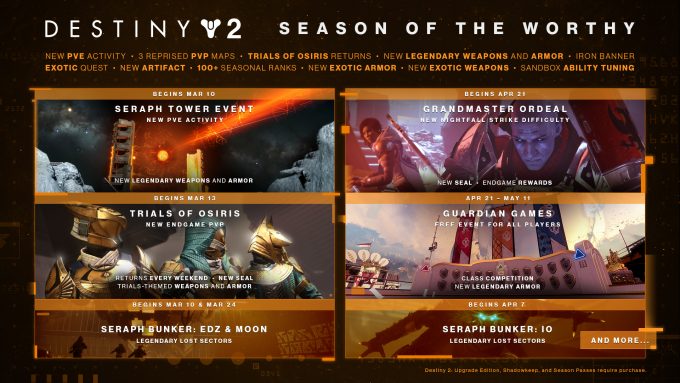 At this point in time, we haven’t jumped into this new season yet outside of checking out what’s immediately obvious around the tower and menus. The quest panel and other menu items have been overhauled a bit, which is genuinely great, and as the above shot shows, there’s a fair bit of content coming. The problem? On one hand, there’s not enough content to keep players engaged for months, and second, Bungie overhauled a core mechanic that has ruffled many feathers.

In Destiny, some “emblems” you receive and wear like a badge will include stats that you may want to show off. That could include PvP kills, how many times a certain event was completed, or any other key number that a player may find worthy of tracking. In the latest update, Bungie made it so that players could assign any one of these stats to their emblem, but at the same time wiped out the vast majority of stats that players have accrued after all this time. Notice all of the zeroes for kills in the shot below: 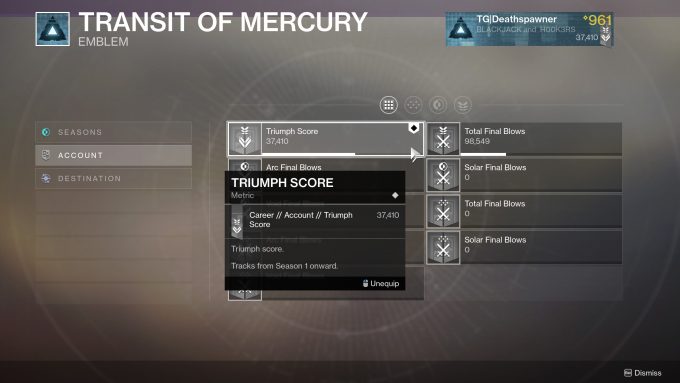 An example of how strange this move was comes with the fact that some players had been working on last season’s “Fractaline” donations, eager to show off their big numbers in the new season. Some spent a huge amount of time grinding these quests, and if anyone finished their work right before the reset, that stat disappeared moments later into the void.

Stats don’t matter in the grand scheme of things. The content matters. The fact is, though, many have invested lots of time into the game, and likewise have fun stats to scroll through. Now, almost all of those are gone. Bungie claims the move had to be done in order to introduce the new system, but conversely, it seems the overwhelming majority would not have welcomed this change. It seems like this is a mechanic that should have existed from the start, or have only been introduced with old stats intact.

This is just one issue. If you check the game’s subreddit, you’ll find plenty of complaints overall, intermingled with some trying to invoke some calm. Usually, a content release will happen, and it will take a bit of time (at least a few days) before complaints rise, but this latest season didn’t even last a day before players took to the forums.

Take these threads, for example: “What the hell is Eververse income funding, Bungie?“, “They’ve added more paid Sparrows than new original guns and armour “, “This game no longer feels like Destiny.“, and one that really stood out: “I hate that I miss Activision.“.

As much as this seems to be a bummer, you shouldn’t let it deter you from playing if you haven’t hopped on for a while. Likewise, if you’re a new player, it’s certainly worth giving the game a go, since it’s free to get into, with lots of content available – although you can only expect fragments from newer DLC and season packs.

If you’re a Destiny 2 player, what are your thoughts on the current state of the game?