Rockstar has just released the latest update to its popular Red Dead Online, with new content called Blood Money. Along with this update, the long-anticipated introduction of NVIDIA’s DLSS has finally happened, and as you’d expect, it brings some pretty hefty performance uplifts – and thankfully so, since this is a game that could benefit greatly from it at higher resolutions.

NVIDIA notes that gamers can experience an up to 45% performance uplift at 4K, although on some lower-end GPUs, you may still not reach the level of performance you’d really like. With a PC equipped with an AMD Ryzen 9 5900X processor, NVIDIA shows that 4K performance can reach about 55 FPS on the RTX 3060 Ti, and scale nicely upward from there. 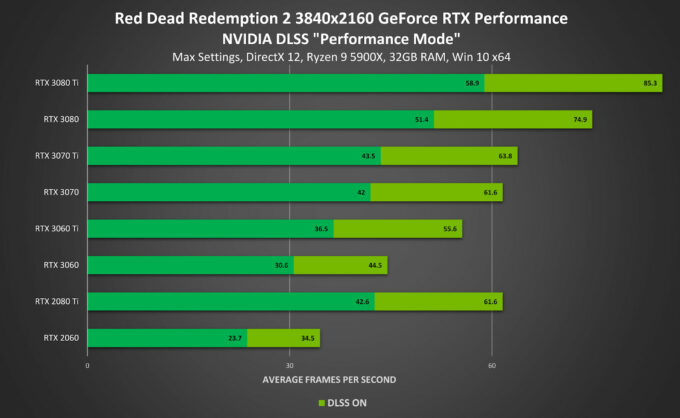 If you’re rocking the last-gen RTX 2080 Ti, you’ll be happy to know that DLSS will allow you to run RDR2 with max detail at 4K resolution and still hit 60 FPS. With the new RTX 3080 Ti, which performs very close behind the RTX 3090, that performance can boost to 85 FPS.

Notably, this is just a DLSS update; no ray tracing effects have been added. Considering how difficult it is to hit 60 FPS even with DLSS, it almost seems like it’d be impossible to hit 60 FPS at 4K with RT enabled – but still, it’d be nice to see, especially if you are running 1080p or 1440p (or ultrawide).

If you have an RTX card, and RDR2, you simply need to let your client of choice download the latest update, and then you can access the improved performance right away (after enabling the setting, of course).