Linux Benchmarking Gets Even Better With Phoronix Test Suite 7.0

Long story short: following the launch of AMD’s first Ryzen processors, I decided to throw all of our previous CPU results in the garbage and start a suite anew. I’ll give more verbose reasoning in a future post, but what this means to you is: TG hopes to offer a selection of great benchmarks and tests, and that’s definitely going to include Linux.

Despite being a Linux user of close to 18 years, and having talked about it quite a bit over the course of Techgage‘s life, aaaand the fact that I’ve tried to integrate Linux testing in the past, Linux benchmarking is something that just hasn’t existed on the site. The biggest reason is time, and that’s the biggest help that Phoronix Test Suite can offer.

I’ve known of Phoronix Test Suite since its original release, but again, time kept me away from taking Linux testing too seriously. Given this latest CPU suite overhaul, though, I decided to revisit the idea of including Linux, primarily because I saw a good amount of demand for it surrounding Ryzen’s launch. So, I gave PTS a download, and was immediately won over. 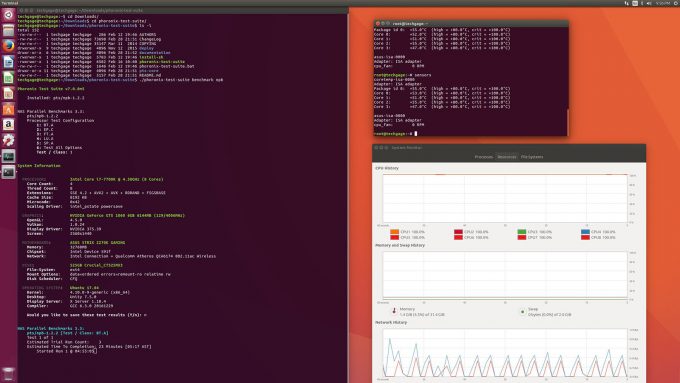 Simply put, Phoronix Test Suite is the most flexible, comprehensive benchmarking tool I’ve ever used. With a single command, I can conduct all of our Linux testing in one fell swoop. While there are additional benchmarks I could add, what’s included in PTS is good enough; anything more would be just being more complete for the sake of it (and that goes against the issue of limited time).

I am not going to get into how the entire suite works, or what it can do, because that would require an entire article (and then some). With PTS, you can easily install about 200 tests, run them a variety of different ways, and then get a helpful HTML file at the end complete with tabled and graphed results.

Similar to other suites that let you upload your scores to the Internet, PTS does, too. Using the tie-in OpenBenchmarking.org website, you can upload your own results, or compare yours to others.

That’s quite a bit of testing to start from scratch from, but I am hoping the updated suite, with the help of PTS, will be more complete and relevant than ever.

What’s new in PTS 7 in particular is general polish – those who’ve been using the suite for a while will notice the difference – improved system info, new commands (eg: estimate-run-time and winners-and-losers), graphing improvements, and performance improvements in Phoromatic, a feature that allows you to run tests remotely.

You can read more from the suite’s developer, Michael Larabel, here, and grab the download here. Note that while PTS is available in some distro repositories, they are likely going to be out-of-date – it’s just best to grab the simple installer or .tar.gz from the source.