Following-up on its G915 LIGHTSPEED full-sized keyboard release last fall, Logitech has just announced the release of a more compact version: G915 LIGHTSPEED TKL. This tenkeyless design is pretty much what you’d expect to see with a cut-down G915, except maybe the fact that Logitech has culled all dedicated macro buttons. Fortunately, it has everything else that made the original G915 LIGHTSPEED alluring.

This TKL measures in at 15.2″ x 5.9″ x 0.9″, and it makes good use of all of that space. The volume roller makes its appearance at the top-right, while the media buttons are found to the immediate left of that. On the other side of this plank, there are buttons to enable Game Mode (Windows key disable), adjust RGB, and connect between devices. 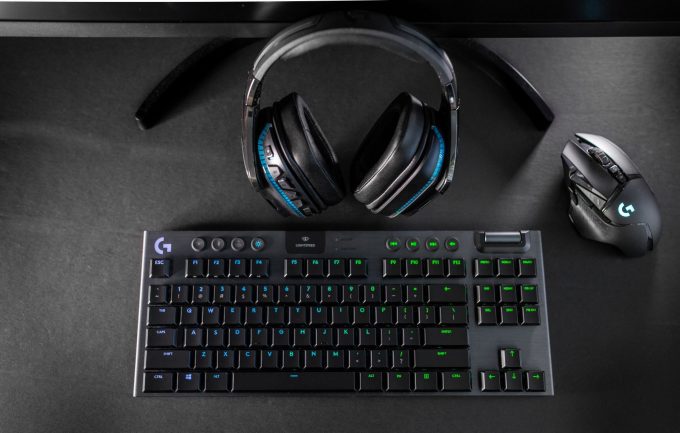 If you like being able to use a keyboard for multiple devices, you could keep the LIGHTSPEED’s 2.4GHz wireless connection locked to your primary rig, and then use the Bluetooth connection for your notebook (in lieu of built-in), mobile, or even a system like Android TV. Dedicated buttons on this keyboard will make switching between those easy.

Logitech is fortunately forthcoming about the worst-case battery-life scenario, which is 40 hours at 100% RGB brightness. That’s pretty good, because as long as you plug in every few days, you should never find yourself without juice. We can’t find numbers with RGB off, but we’d guess battery-life would be improved quite a bit overall for those willing to go dark.

All-around, this new keyboard looks really great, but there are two things that stand out: its premium $229 price, and the fact that the connector remains microUSB-based like the original G915 LIGHTSPEED. It would have been nice to see a more durable USB-C connector. If that doesn’t break your want for this keyboard, you can grab it on Logitech’s own site, either with tactile, linear, or clicky low-profile switches.