The peripheral market has become littered with mechanical keyboards, but despite that being the case, one of the world’s largest peripheral vendors has remained silent – until now. I’m of course talking about Logitech. With its just-launched G710+, the company finally offers its fans a mechanical offering, and being a “G” model, there’s a big focus on the gamer. Could the G710+ become a must-have mechanical offering? Let’s see what it brings to the table.

One of the biggest things that will set the G710+ apart from the rest is that it has a couple macro keys aligned to the left side (similar to Cooler Master’s Storm Trigger), and at the top, dedicated media keys. Yes, dedicated – a common omission with mechanical offerings. While it’s not clear if those keys are mechanical as well, it could be argued that it doesn’t matter given how pushing them will break you from your regular flow anyway. 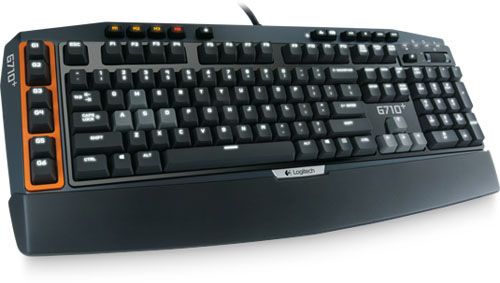 Every single key on the G710+ is backlit, mostly in white, and the result looks quite nice – though I’m a sucker for white LEDs. Want only the WASD section lit up? You can do that. According to some press images, the keyboard uses Cherry MX brown switches, which means there’ll be a slight bump as the key is pressed down, different from red or black which are linear in design.

Catering to those who love to sit on their keyboards, the G710+ allows anti-ghosting for the 110 main keys, or for those who want to go the n-rollover route, the limit becomes 26. Other key features include a removable palm rest, legs and a USB port.

Logitech’s G710+ will launch this month in the US, and December in Europe, for around $150 USD. At that price, it’s a bit more expensive than competing offerings, though its design, full back-light and gamer-oriented feature-set may help set it apart from the crowd, and potentially even deserve its price tag. We’ll find out soon enough once we can get one in our lab to test out.