Maxon has just announced an update involving something we’ve been waiting years to hear: support for AMD’s Radeon GPUs is being added to the company’s popular Redshift rendering software. For almost the entirety of Redshift’s life, support has exclusively revolved around NVIDIA’s CUDA (and OptiX), with support for Apple’s Metal added just last spring. With AMD now joining in on the fun, the amount of choice users have for their new hardware purchases has been bolstered.

As we saw with Blender 3.0’s overhaul of its AMD support, Redshift is going to be making use of AMD’s HIP (Heterogeneous Interface for Portability), allowing developers to transition CUDA code for AMD use, with “very minimal changes” being required to get up-and-running. 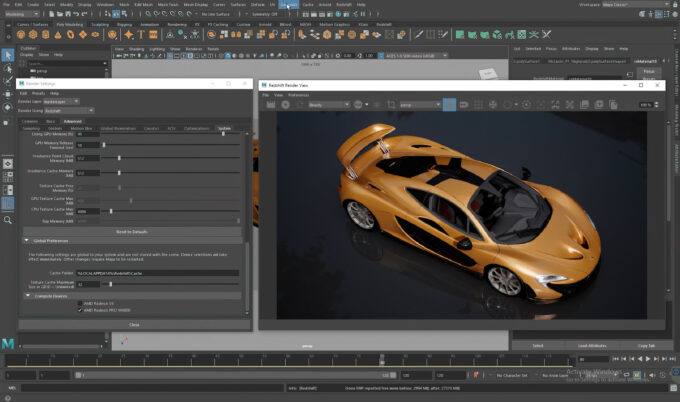 This announcement does bring about a few caveats, or at least unknowns, that we’ll surely learn about soon enough. As it stands, both AMD and Maxon are revolving messaging around Redshift running on a “validated” Radeon PRO W6800; no other GPUs are mentioned, especially gaming-focused Radeons. Considering that Redshift runs on NVIDIA’s entire GPU stack, we’re hopeful that gaming Radeons will be able to get in on the action, and that it won’t actually be exclusive to the PRO workstation series.

Another aspect we’re not sure on is how deep the AMD support will go. Blender 3.0, when it released, didn’t support anything other than AMD’s latest RDNA(1) architecture, so we wouldn’t be surprised if the situation turns out to be the same for Redshift. Whatever support there is, we’re looking forward to being able to include Redshift performance in our AMD GPU reviews.

It’s also worth noting that Redshift has also just gained CPU rendering support, and while we’re not sure that CPU+GPU heterogeneous rendering will be an option for every vendor, it is at least supported for some. This is another angle we’ll give a test once we’re able.

It appears that the current Redshift version includes this AMD support, but users won’t be able to take advantage of it until AMD releases its new 22.Q1 Enterprise driver. We’re told that this driver will release this quarter, but we’re already into Q2, so it’s a bit of a confusing situation.

Either way, we’re pumped to see AMD support in Redshift finally announced. It’s felt like a long time coming, and we hope other CUDA-only render engine mainstays are paying attention.