The next Xbox is slated to release this fall, but it seems as though Microsoft is taking care of some changes well before then. For as long as we can remember, Microsoft and Sony consoles have required a paid subscription to take full advantage of their capabilities, namely online play. With the recent removal of a one-year subscription option from Xbox Live Gold, we can’t help but wonder if that is going to be changing.

Microsoft has traditionally sold its Xbox Live Gold with a discount if you opted for a full year subscription, but currently, only one- and three-month options are available to purchase. Could it be that once the Xbox Series X releases, people won’t be forced to pay for online access? That’s one possibility, but another is that a paid subscription might still be required – it’d just be called something else. 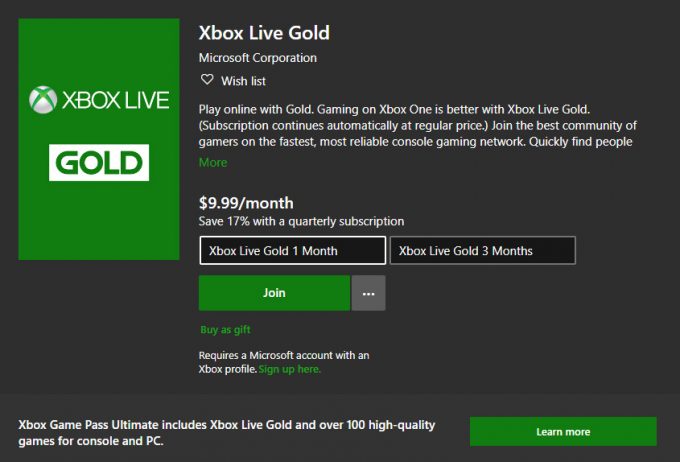 Another subscription Microsoft currently offers is Xbox Game Pass, which gives access to a large library of games on either an Xbox console, or PC. If you opt for the biggest subscription, Game Pass Ultimate, both platforms are taken care of, and Xbox Live Gold gets thrown in.

We’re obviously not privy to what Microsoft is planning, but it’s not a coincidence the company decided to suddenly pull the one-year subscription; it’s already confirmed that the change wasn’t an accident. This also follows the news that Microsoft has halted production of certain Xbox One models, another reminder that we’re getting really close to the launch of the next major Xbox iteration.

We’ve never been a fan of Xbox Live Gold or PlayStation Plus from the perspective that having to pay for online multiplayer is pretty garbage, so we will likely welcome the death of XBL with open arms – even if it’ll just be bundled in with something else. We still hold out hope that online play won’t require a subscription, something PC gamers have enjoyed forever. We shall see what actually happens.