Microsoft’s Surface series has received one heck of a shot in the arm today. The company has managed to not only launch a big collection of new products, but have every single one of them demand attention. Let’s tackle the new laptops, starting with the Surface Laptop 3:

The latest Surface Laptop series features two models, with the smaller of the two being a follow-up to the previous-generation 13.5″ model. That one has been updated to include Intel’s 10th-gen Core processors, and a refined design that screams elegance. Colors include Sandstone and Cobalt, and you can choose either an Alcantara fabric or all-metal finish.

The new Surface Laptop comes in at 15-inches, and is made hugely interesting by the fact that it includes an AMD Ryzen processor specially made for the device. AMD even calls it the “Ryzen Surface Edition” processor, although it’s not clear at this point what its specs are. Microsoft is quick to say that it is “the fastest 15″ laptop you can buy”, which looks great on AMD at a time when it’s keen on expanding its notebook presence.

The 15-inch Surface Laptop also includes an improved typing experience with more satisfying key travel. It also includes a 20% bigger touchpad, and USB-A and USB-C. Fast Charging will get this laptop from 0 – 80% in about an hour. Microsoft is setting an SRP of $999 for the Intel-equipped Laptop, and $1,199 for the AMD-equipped one.

Next up is the Surface Pro, a follow-up the 2-in-1 model that helped the entire Surface series really take off. Microsoft is following-up on the Surface Pro 7 with a new model again including Intel’s 10-th gen processors, and with both USB-A and USB-C included. Once again, Intel has somehow found itself to be the bottom model on offer here, because the new Surface Pro X skips Core chips just like the Surface Laptop did, but this time, it wasn’t for an AMD chip. Boy, this is getting interesting. 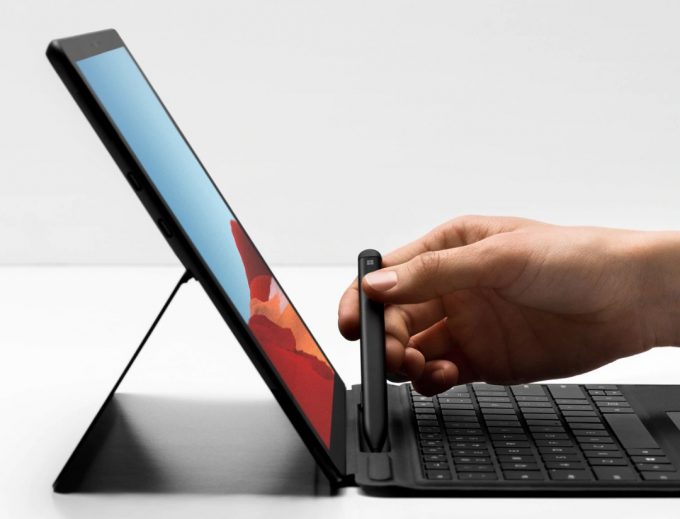 The chip in this top-end Surface Pro is the Microsoft SQ1, a chip co-designed with Qualcomm. At a time when some have been wondering about the validity of Arm-based processors in notebooks, Microsoft has made it clear that they absolutely have a place. The company even goes as far to say that the SQ1 is the “fastest Qualcomm processor ever created for a PC”, which says a lot when the Snapdragon 8cx is meant to be a big leap forward from the Snapdragon 855.