After months and months, and months, of speculation, Microsoft has finally unveiled their Zune HD… a model unlike any other Zune before it. Similar to the iPod touch, the Zune HD has a large 3.3-inch 480×272 touchscreen (OLED), a built-in HD Radio receiver (nice!) and even HD output, when hooked up with a dock. Oh, and it looks pretty awesome as well.

With the incredible success of the iPod touch and iPhone, Microsoft no doubt wanted a piece of the action, and for the most part, the Zune HD is quite similar to those devices. But… I really, really appreciate the addition of the HD Radio tuner, as the lack of any tuner is my biggest gripe with current iPods.

Aside from the fact that it looks good, and has a touchscreen, specifics are scarce. No mention of the CPU was made, and neither was battery-life. And probably most importantly, neither was storage. Either way though, the Zune HD looks quite good, from both an aesthetics and features perspective. Also interesting is new Zune+Xbox functionality, which will likely be appreciated by anyone with both. We’ll likely learn a lot more about that feature’s usefulness at E3 next week, where the platform will be available for public consumption. 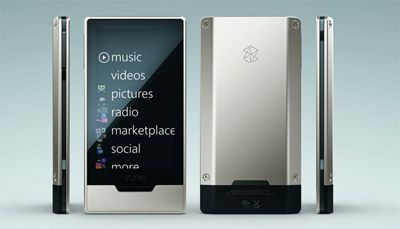 Details are also scarce concerning storage capacities, CPU performance, and other crucial numbers, but it seems like they’ve got more in store come E3… and that’s the next big piece of news. Zune integration is coming to the Xbox and Xbox Live, as the Zune marketplace will step in to replace the current Live video resources, expanding the library and offering all kinds of new perks, like Zune’s first foray into international waters.