It’s taken a little while to get here, but Mozilla has finally released an RC (release candidate) version of Firefox 4, which means for all intents and purposes, it’s near-finished. Though the company hasn’t announced an official release date for the final version, it could be within the month, as RC builds tend to have a much shorter lifespan than betas.

Since Mozilla released the first beta of Firefox 4 last July, it followed-up with 11 more, and then brought us the RC that we see today. In all the time that the beta was available, Mozilla patched up an enormous 8,000 bugs, with the help of its million users that looked past the “beta” stigma to give the latest browser a good, thorough test.

For those who haven’t kept up on what Firefox 4 brings to the table, Mozilla launched a page that introduces you to the bevvy of new features in just a couple of minutes. The most noticeable change for Firefox 3 users is that the entire top portion of the browser has been reorganized, with the tabs on top – and judging on my experience with Google Chrome, it’s a good thing.

Also new is an improved sync feature, a better way of organizing your tabs with the help of groups, an improved add-on manager, and of course, the adoption of new Web technologies and also a faster base. I’ve been deliberately trying to avoid using the Firefox 4 beta for months, because I want to consider the final launch a “fresh start”, to see if Mozilla can regain me as a user since I first fell in love with Chrome last year. 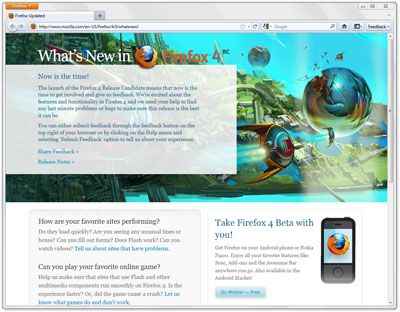 Mozilla Firefox 4 for Windows, Mac and Linux has exited the beta cycle and is now available as a release candidate in more than 70 languages. The millions of users testing Firefox 4 will be automatically updated to this version and will join our Mozilla QA team in validating the new features, enhanced performance and stability and HTML5 capabilities in Firefox 4.