USB 3.1’s specification, which will deliver data transfer rates as fast as 10Gbps (gigabits per second), is slated for mass adoption by the end of 2014. The 3.1 specification is twice as fast as the current USB 3.0 spec. 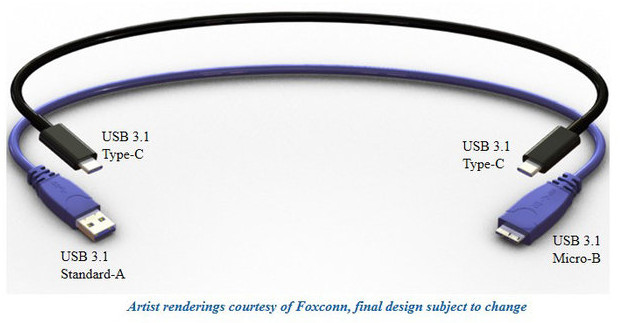 Along with the faster transfer data transfer speeds, the new standard will also see a new type of connector. The Type-C connector is a radical departure from the current crop of USB connectors in one specific way: It is symmetrical. No longer will connections be dependent on the orientation of the plug. The new Type-C connector is designed to be fool-proof and fumble-free.

The Type-C USB 3.1 connectors are intended to replace both the USB and Micro USB connector standards eventually. About the same size as Apple’s Lightning connector, Type-C is substantially smaller than the current USB connectors installed today.

Both the new 3.1 spec and the Type-C connector design are expected to be finalized in July.