With all its awesomeness and potential, DirectX 11 sure does suffer a lacking of demos that can show off its abilities – and the demos that do exist tend to focus mostly around tessellation. Well, coming from Japan is a simple demo called Rigid Gems, utilizing “hybrid raytracing” techniques that helps objects, in this case gems, look very realistic. 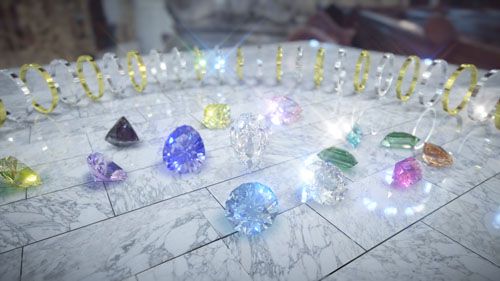 There’s no benchmarking mode with Rigid Gems, so its use is limited to just looking pretty. Its readme is also in Japanese, so here are the controls: Space resets the current scene, Enter goes to the next scene, Page Down / Page Up adjusts the zoom level, Home / End adjusts the f-stop (aperture) while Insert / Delete adjusts the focus.

Because of the DX11-specific techniques the demo uses, there’s a limited number of textures used in the demo, resulting in the entire test taking up a mere 25MB (8MB archived). You’re able to use your left mouse button to manipulate some objects, and the scene’s camera can be adjusted with the right mouse button.

Overall, a simple demo, but a neat one. Perhaps it won’t be too long before we see ultra-realistic gemstones like these in real games.