Not Like a Fine Wine: Windows Activation Still a Piece of Junk After All These Years

This past Friday night, I did the only thing any single, lonely male would do: I played my MMO. During a quest, Windows 8 decided to kill my character with a full-screen activation nag screen. For those unaware, everything in Windows you don’t expect to be full screen may very well be in Windows 8. At the time, I didn’t think to screenshot this prompt, because I didn’t anticipate what was to come.

Because I find it silly in this day and age to call tech support and A) Riddle off your credentials, B) Riddle off your 25 character product key and C) Listen to someone riddle off a 25 character key back, I opted to seek out cracks to solve my issues rather than do the “legal” thing. Two cracks later, I got nowhere. Perhaps they work for some people, but they didn’t for me.

At this point, I sucked it up and called Microsoft’s tech support. During the call, the lady on the other end told me that I was breaking up – despite having a 3/4 bar connection – and after moving close to a window, it was obvious that the call just wasn’t meant to be. I apologized, hung up, and shouted something (probably friendly) at my PC. As I moved to a new apartment at the start of the month, and my ISP/phone company cannot install my utilities until the 14th, it felt like there was just one solution:

I had to stand back for a couple of moments and think this through. Was I really about to reformat my PC because of a stupid OS activation issue? For my legal copy of Windows 8? I sure as heck didn’t want to. But then I remembered that, via the install media, you can install a fresh copy of the OS while retaining your apps, settings, files and sanity. So, I mounted that ISO, took a deep breath, and went for it. 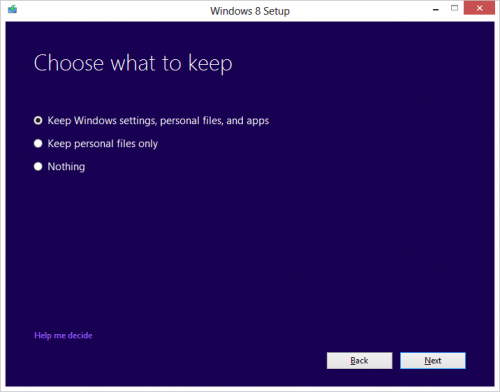 After putting my product key in, I chose the option as seen in the shot above, and then the process soon got underway. In all, I’d say the entire install process took about 40 minutes. Afterwards, I was back at my Windows 8 desktop, with every single app in view via the Start screen, and generally speaking, the OS just the way I left it. Without the activation nag, of course. Small caveats included: A) Having to reactivate my Office install, B) Having to reinstall VMware and C) Having to reinstall my mouse software (SteelSeries). 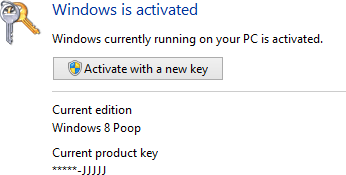 Side note: When you do this, Windows moves your old installation to “Windows.old” on your C:\, meaning it’s just hogging up space. When you’re confident you won’t need this anymore, you can run Windows’ cleanup tool (‘cleanmgr’ from the run line, then choose “Clean up system files”) and clean things out that way. My Windows.old folder was 25GB, which is a lot of space on an SSD.

So, the question has to be begged: what the hell was my problem? As it turns out, my issue directly stemmed from the free Media Center upgrade that Microsoft passed out a couple of months ago (something I mentioned in previous posts). Even though I had no immediate plans to use the Media Center portion of the OS, I installed it anyway because Microsoft had a scheme in place where if you didn’t use the key by a certain point, it would become invalid. At the time, I figured there’d be no harm, so I went through with it.

What I didn’t realize is that installing Media Center essentially changed my edition information. Instead of “Windows 8 Pro”, my OS became “Windows 8 Pro with Media Center”. As such, this rendered my original product key entirely invalid for that install. You can’t downgrade Windows 8 versions with this sort of granularity (as far as I can tell), so my only option at this point was to call Microsoft, or reinstall. Since I couldn’t do the former, I had to do the latter.

In Googling about, it became obvious that I wasn’t the only one with this problem, and every time, the solution was to call Microsoft. Here’s where I really become confused. Microsoft is one of the best-known tech companies out there. It’s modern. Yet, for some reason, it doesn’t offer online chat tech support. I’ve seen vacuum cleaner companies that have had online chat tech support, but Microsoft? The creator of the most popular consumer OS and billions of other software solutions? No, don’t be ridiculous. 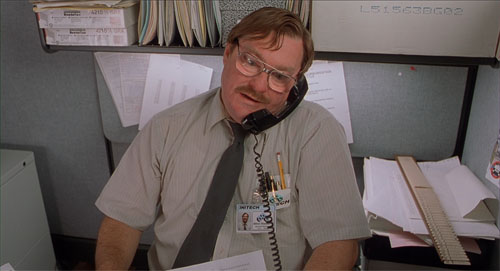 “Are you sure your product key is plugged in, sir?“

There’s no doubt that my particular situation is unique, but had Microsoft offered me the ability to contact it via online chat, I would have been able to solve my issue quickly.  I wouldn’t have to recite my product key out loud and hold my breath while trying to listen to the person on the other end of the line give me a new one. If I was able to conduct that call, that is.

Let’s not avoid the main topic here: Windows activation has long been a piece of junk, and my experience this past weekend proved to me that nothing has changed. I’ve had activation issues with XP and Vista to such a large degree that I ended up (successfully) applying a crack to my Windows 7 installation before I encountered any issues. Isn’t it a little silly when things come to that? I’m a legal user, and I sure don’t like having to waste hours of an afternoon because of a needless issue.

As a tech enthusiast, I use my PCs a lot, and I’m not ignorant of that fact that I’ll likely run into a greater number of issues than the regular user. But the fact that I’ve dealt with activation issues with every version of Windows since XP tells me something has to change. Back in the Vista days, I encountered an issue where I couldn’t access my OS due to an activation issue, and as it was 2AM at night (this was a benchmarking machine), I was out of luck until the morning. To say I was enraged is a slight understatement.

So dear Microsoft, I ask you; Why don’t you have online chat tech support, and why must you have such problematic activation schemes for your software? When you give me a key to apply to my OS that months later causes me to reinstall the OS, that’s a problem. That’s a real problem.

There’s quite a number of people accusing me of A) not understanding how to use Windows, B) not activating the OS in the first place and C) not using a legitimate copy. I’d like to address those concerns here, since not everyone is going to peruse our comments section.

First, I have a long history of using Windows. I started out on 3.1, and have used each consumer version leading up to the present. I’m also experienced with Linux, and software in general. I’m A) not going to be ignorant enough to whine about activation problems with an illegal copy of Windows, nor B) write a rant post about something I don’t understand. It’s that simple.

If anyone takes the time to peruse our other content, and preferably mine in our software section, any doubts should be quelled. Since the Windows XP 64-bit launch, we’ve received product keys from Microsoft’s press department, including this one for Windows 8. We have a good relationship with Microsoft and have no reason to write a hate post against it, much less one that involves an illegitimate copy of its OS.