During his GTC keynote today, NVIDIA’s Jensen Huang had lots to reveal about the company’s upcoming graphics architecture, and all of what we’ve heard sounds great. The rumor mill has suggested that this new architecture would be dubbed either Ada or Lovelace, and Jensen put an end to the guessing: it’s “Ada Lovelace”. This first and last name label is a bit of a departure from typical naming, as prior to this, we had Ampere, Turing, Pascal, Maxwell, and so on.

As we’ve seen NVIDIA do a few times in the past, this keynote kicked-off with a look at a brand-new ray tracing tech demo, Racer X, which looks downright incredible.

Naturally, none of the shadows or lighting have been baked-in here. What’s seen is entirely real-time ray tracing, helping to deliver even more compelling environments. Since some tech demos never get released to public, we hope this one will, because it looks like it’d be a lot of fun to play / explore through. It really gives us some Re-Volt vibes.

In typical fashion, once the tech demo playback was complete, Jensen revealed that the entire demo was rendered on a single Ada Lovelace GPU. We heard the same statement with last-gen’s Marbles RTX demo, and the last-last-gen’s Star Wars Reflections demo. It does highlight the fact that NVIDIA continues to pump more and more RT optimization into its GPUs, which for gamers and (especially) creators is a great thing. 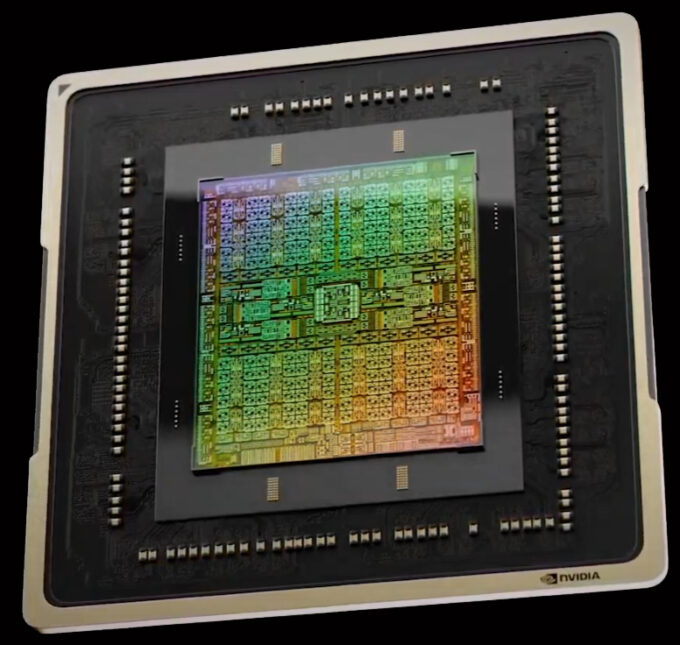 Ada Lovelace is built on TSMC’s 4n process, and it brings notable upgrades to each performance metric we’re used to seeing. The chip you see above comprises 76 billion transistors, and over 18,000 CUDA cores, which is ~70% more than the Ampere generation.

On the shader processing side, there’s a new streaming multiprocessor design that delivers 90 TFLOPS performance, which is over 2x the previous generation. That implies a new top-end GPU will literally be twice as fast as the current-gen champion, but we’ll exercise caution and wait to see what our own benchmark results will reveal.

One thing that helps boost shader performance is a new feature called Shader Execution Reordering, which reschedules work on-the-fly, and allegedly bolsters ray tracing performance by 2-3x, while also providing a 25% boost to regular gaming. NVIDIA says this implementation is as significant as out-of-order execution was for CPUs when it was introduced. This all comes aside from the RT cores upgrade, which itself sees a massive performance boost.

Speaking of the RT cores, NVIDIA once again makes our jaws drop at the potential. Anyone who’s read our GPU rendering articles in recent years will have seen that NVIDIA’s RT cores dramatically accelerate performance, and here we’re seeing a promise of a 2.5x increase in total throughput – that’s 200 TFLOPS on Ada Lovelace, vs. 80 TFLOPS on the RTX 3090 Ti. Suffice to say, we cannot wait to test this out for ourselves. 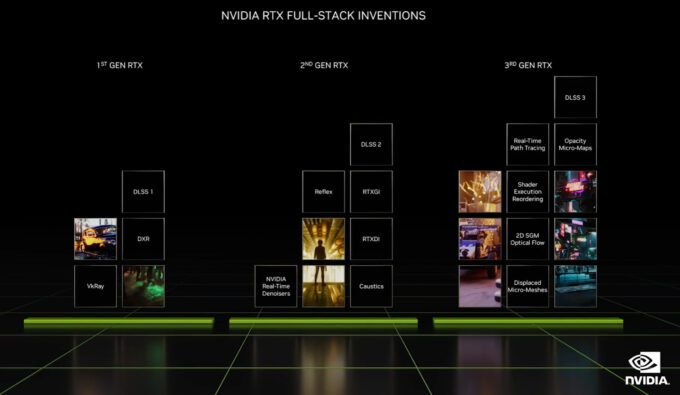 Even the Tensor cores have seen a massive boost in performance – some 4x over the previous generation. That’s going to be beneficial both in gaming when using DLSS, and also in creator workloads when using denoising. In an example provided, whereas DLSS 2 could increase a game’s (Cyberpunk 2077) FPS from 23 FPS to 62 FPS, the brand-new DLSS 3 will further enhance that to 101 FPS.

The amount of information released during this keynote was pretty intense, so we’re going to leave more technical details for the launch review. For editor’s, NVIDIA’s soon to host additional briefings to deep-dive the architecture better, so we’re bound to learn about some other design traits that are worth repeating. 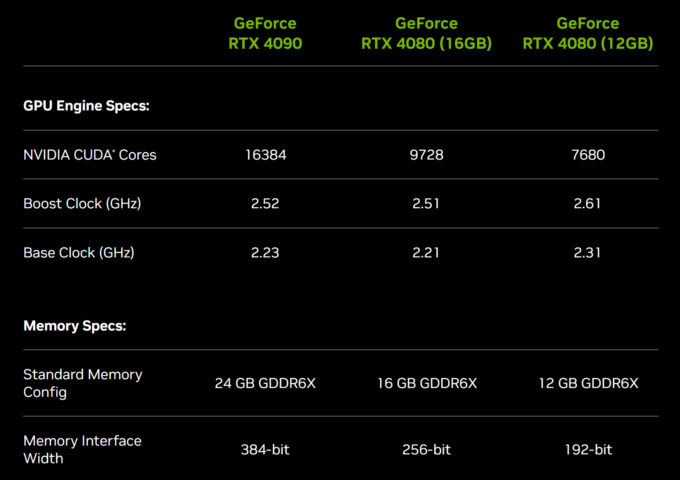 NVIDIA’s pricing the RTX 4090 with a $100 premium over the RTX 3090’s launch price, putting it at $1,599 USD. The 16GB RTX 4080 is $1,199, while the 12GB version is $899. If you were hoping for lower prices this generation, you’re not getting them. It’s a good thing, then, that the promised performance bumps are really pronounced. At least that’s what we’re told. We’re admittedly a bit concerned over the 4080 12GB’s 192-bit memory, a bus normally seen on lower-end GPUs, so that GPU should prove really interesting to test.

Hardware aside, NVIDIA promoted some game titles that use its latest technologies to great effect. Surprisingly, it announced a brand-new RTX take on another classic game title, this time Portal. This editor has played through Portal at least five times, so to see the game with ray tracing enabled is simply… awesome.

While we would have hoped to see Portal 2 in the crosshairs, it’s hard to complain about the feature being brought to the original, because it looks so good. And, this is not the only game to see some love. So too does Flight Simulator, which can see massive performance gains with DLSS 3:

All in all, this was an interesting launch, and we hope the performance gains we were shown carry over to both our gaming and creator tests. There are many reasons to be excited here (maybe not with the pricing, if you were hoping for lower costs this gen). With AMD also today unveiling a November 3 launch date for RDNA3, and with remaining Intel Arc cards set to launch soon, it really has become an incredibly busy GPU season in an instant.