It’s not often we see NVIDIA take care of an entire lineup’s worth of products in two simple blasts, but that’s just what we’re seeing with the company’s latest Quadro series, based on the Pascal architecture. A couple of months ago, NVIDIA ushered in its fastest Quadro ever, P6000, and slotted a P5000 just under it. Today, six more models fill in not just the gaps underneath the P5000, but over the P6000. 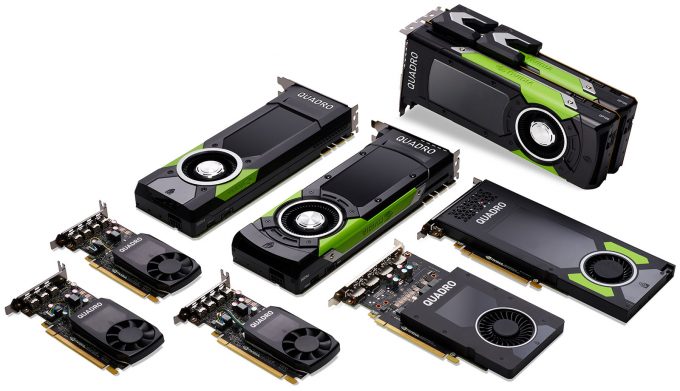 For those needing some real horsepower but can’t go with NVIDIA’s top-tier models, your current-gen choices become the Quadro P4000 and P2000. We were not given pricing in time for this post, but we’d expect these (and all of the other Pascal cards) to carry similar pricing as their Maxwell-based predecessors. That’d put the P4000 at ~$1000, and the P2000 at ~$500.

Based on the specs and pricing, I think the Quadro P4000 is going to become the best bang-for-the-buck Pascal Quadro. It’s packed with 1792 CUDA cores and 8GB of fast GDDR5, but should keep to the $1,000 price-point, or perhaps even dip a little under it.

It’s time to talk a little bit about the newest top-end card to grace NVIDIA’s Quadro lineup: Quadro GP100. To be clear from the get-go, the P6000 is not in any way being replaced or superseded; it still remains the de facto choice in NVIDIA’s current Quadro lineup for those who want the ultimate in performance. The GP100, by contrast, targets customers who don’t just need high-performance in single-precision workloads, but also half- and double-precision workloads.

You’ll note from the table above that the GP100 has fewer cores than the P6000, putting it in line with NVIDIA’s GeForce TITAN X gen2. Beyond that, extra silicon has been introduced that gives users 1792 double-precision cores to use, pushing a total bandwidth of 5 TFLOPs. Single-precision performance is top-rate also, at 10 TFLOPs, and the half-precision performance is unparalleled, at 20 TFLOPs. Did I mention it also comes with next-gen HBM2 memory? 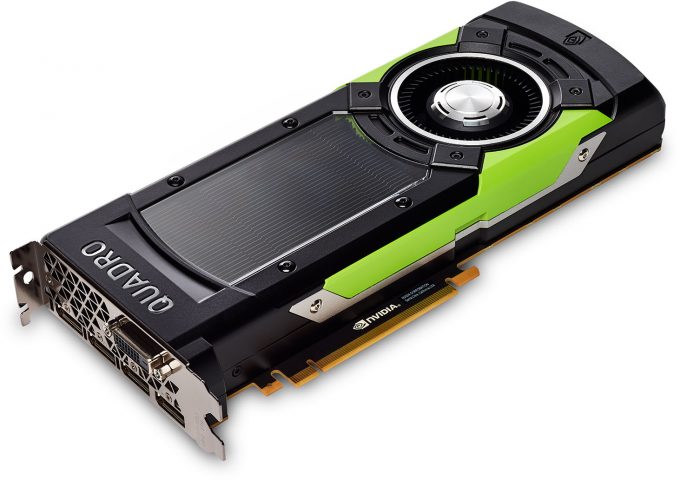 NVIDIA would word it differently, but the GP100 is in effect, to me, a Quadro and Tesla card put together. Tesla cards have never had video outputs, because the focus with those is purely on compute. But Tesla is where you had to look if you wanted uncapped double-precision performance. With the GP100, you get the best of both worlds: an ultra high-end Quadro that also has ultra high-end half- and double-precision performance.

For those able to go as high as the P6000 and don’t take advantage of double-precision workloads, then that card remains the best choice. Those requiring the high DP and HP performance in a workstation card should opt for the GP100. We were not told what pricing premium the GP100 would have, and I don’t feel confident enough to hazard a guess.

If the GP100 sounds a little bit familiar, it’s because NVIDIA has been teasing this design for quite some time, spilling most of the beans at its GTC show last year. We were not sure at the time when the card would actually debut, but now we have our answer.

While I’m testing both the P4000 and P2000 (and not to mention P6000, which has almost concluded), you can refer to the chart above to get some performance impressions over the previous generation. Overall, NVIDIA says that its latest Pascal cards are at least 1.3x faster than their Maxwell-based predecessors. The Quadro P400 has twice the performance of the K420, although that’s not that surprising as that place in NVIDIA’s lineup skipped over Maxwell entirely (the K420 was Kepler-based).

Overall, a killer showing from NVIDIA. Despite the P6000 having just landed a few months ago, we already have the rest of the lineup available. Although, I should use “available” in quotes, as it might still take a month for these cards to show up at etail. I’d suspect that the GP100 will the last of the bunch to hit store shelves given it’s the most complex GPU NVIDIA has ever built.