If you’re an NVIDIA user playing either Rust or Metro Exodus, you’ll want to quickly go fetch the brand-new 466.27 GeForce driver which enhances performance and features in both. On the Rust side, NVIDIA’s low-latency Reflex technology has been deployed, with the company promising improvements of up to 38%.

Whether Reflex will improve your K/D really depends on your skill level, but it’s a feature you should definitely enable and experiment with. You can read a full breakdown of the Reflex addition at NVIDIA’s site.

Arguably, the even more interesting change with the 466.27 driver is optimized performance for the newly-released Metro Exodus Enhanced Edition. Metro Exodus was one of the first flagship ray traced titles supported by NVIDIA’s RTX GPUs, and later supported by AMD’s RDNA2-based Radeons. While the game didn’t offer the most mind-blowing implementation of ray tracing, shadows and lighting looked far more natural than it did with RT off.

When Exodus released, could you have imagined that the company would release a major update that actually took ray tracing to the next level? We sure didn’t, but we’re really glad to see it. This isn’t some minor update, either; the Enhanced Edition has to act as a separate release, and be installed separately. Fortunately, anyone who owns Metro Exodus gets instant access to this updated version, with the update applying to all owned DLC, as well.

It’s important to note that this Enhanced Edition outright requires DXR-capable hardware to be used, so you’ll need either an NVIDIA RTX or AMD RX 6000-series GPU. We’ve been planning to get down to RT performance testing for a while, so we’re eager to dig our teeth into it. To get a quick impression of performance, NVIDIA has supplied its own test results: 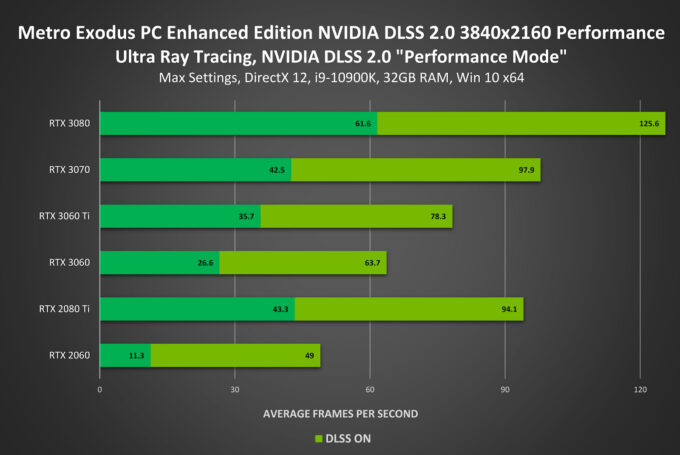 One result that really jumps off of that graph is the RTX 2060, which sees greater than a 4x improvement to performance when DLSS is enabled. Every other listed GPU benefits greatly from DLSS, as well; just not to the same extent. Not that it’s been a secret, but this chart really highlights just how useful DLSS (2.X in particular) can be. Not surprisingly, AMD cards make no appearance here, but its developer gives us an alternative take: 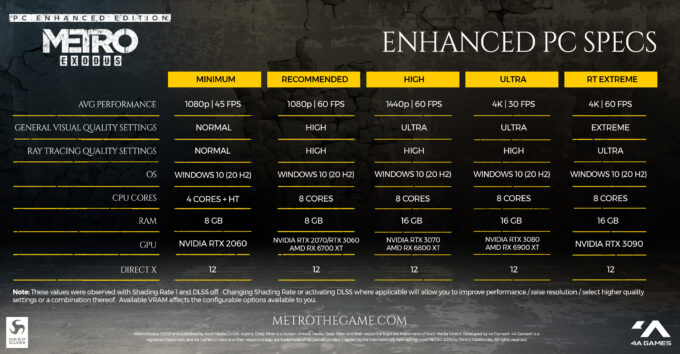 According to Deep Silver, the lowest GPU you’ll possibly want to go with is the RTX 2060, which it says will deliver about 45 FPS at 1080p. That differs from the NVIDIA chart above, which was able to hit about the same performance at 4K. If you guessed that’s because Deep Silver tested with DLSS off, you’d be correct.

If you want to experience the middle-of-the-road detail and performance, you’ll need 1440p resolution and either an NVIDIA RTX 3070 or AMD RX 6800 XT. For the best possible performance, NVIDIA’s top dog RTX 3090 is recommended.

It’s worth noting that this Enhanced Edition update also improves some other aspects of the game, such as with the field-of-view options. “More” is mentioned, as well, but we can’t immediately find greater detail via release notes.

Back to the GeForce 466.27 driver; in addition to Rust and Metro Exodus Enhanced Edition support, performance improvements have also been delivered for the upcoming Mass Effect Legendary Edition, as well as Resident Evil Village. Further, support for five additional G-SYNC compatible displays has also been added. You can see the full list of those here. As for grabbing the driver itself? Grab it from NVIDIA’s driver download page.