It’s proving to be a very busy day for NVIDIA, as the company has not only released its GeForce GTX 1660 SUPER graphics card, but also a new Game Ready driver that introduces a lot of new functionality and polish. In case you are wondering – no, the actual Control Panel didn’t get an overhaul (despite it being a much-requested feature), but, it’s the functionality that truly matters, right?

Another seriously popular suggestion users have had is ReShade support. NVIDIA has offered its Ansel screenshot Freestyle filter tools for a couple of years now, but when many gamers have been glued to ReShade profiles for ages, it’s not exactly complementary to have to transition. That problem goes away with this update. If you have a ReShade profile that you happen to love, and the game in question supports Ansel, you can import in.

You can download curated ReShade filters from NVIDIA here and manually copy them to the Ansel install folder; or, you can open up Ansel inside the game, choose the ReShade filter, and configure your own (that can you can then share with others). 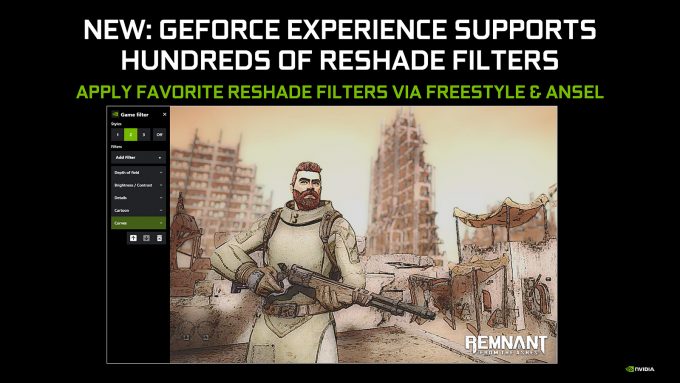 NVIDIA introduced image sharpening in its GeForce driver a couple of months ago, but it gets a shot in the arm with these release by working in any DirectX game, and by letting you configure how strong you want the effect. You simply need to hit up the 3D settings section of the NV Control Panel, then find the option near the top.

A neat addition to this sharpening feature is a checkbox that allows you to tell the driver to upscale the content to the display’s native resolution, requiring you to choose your ultimate target in-game. For example, you may choose 1440p in-game and let the driver upscale it to 4K, in effect giving a similar look, but improved performance. It would admittedly be quite nice for this sharpening tweaking ability to be integrated into the overlay for quicker feedback, but if you are setting it as a global option, you will probably find your perfect balance pretty quickly. 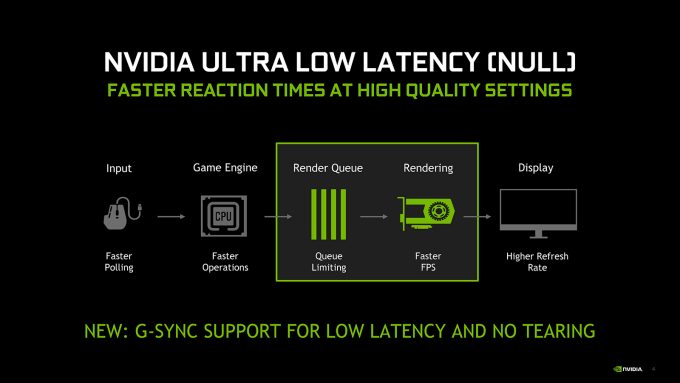 One feature that we’ve heard a bit about from NVIDIA since the summer is low latency mode, but this latest update gives us an Ultra option, as well as the name NULL (/dev/null is unimpressed). With NULL, it’s expected that some performance is going to be lost, but the advantage of lower latency would make up for it. To set NULL, you head to the same 3D settings in NVCP and scroll down the list until you see Low Latency Mode, which can either be turned to “On”, or “Ultra”.

Because NULL works with G-SYNC, you need to make sure that feature is also enabled (if you have an appropriate monitor). Generally, this is enabled by default, but it’s still worth checking in case. Beyond G-SYNC, you’ll also want to make sure VSync is set to “On” in the NVCP, or inside of the game itself. “On” in NVCP’s global settings means that it’s effectively forced on, so even if your game is set to off, it won’t matter (unless the game somehow has a broken Vsync mechanism). 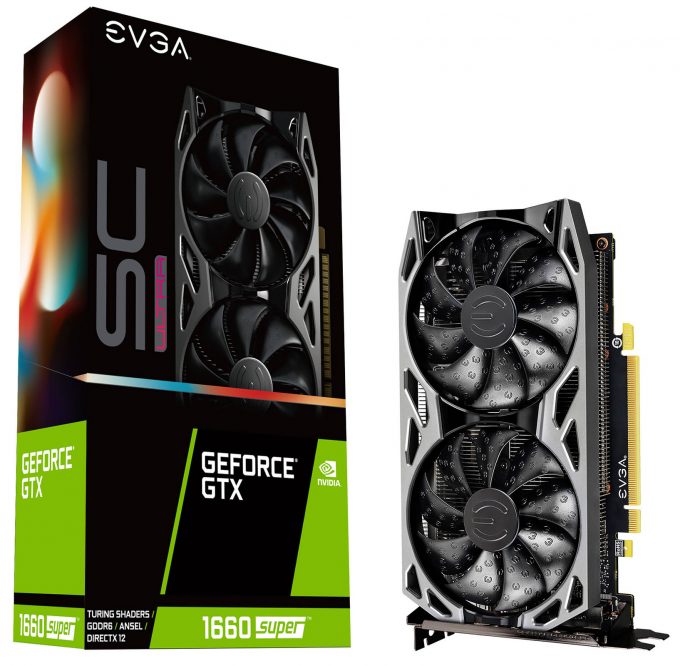 We talked about the 1660 SUPER at the start, and that’s a model that we’ll be talking more about this weekend (as travel impeded all of our benchmarking plans). It’s spec’d similarly to the 1660 Ti, in that it has the same number of cores, and even the same GPU clocks. What changes is the introduction of GDDR6 memory, resulting in a bandwidth boost from 8Gbps to 14Gbps (up from the Ti’s 12Gbps, interestingly enough).

More on the GPU soon. In the meantime, you can grab NVIDIA’s latest action-packed driver right here.