This past June, we saw NVIDIA expand its current-gen Ampere GeForce series from five to seven models, thanks to the release of some Ti variants – 3080 Ti and 3070 Ti. Another Ti model, which has been rumored for quite some time, is the 3090 Ti – what could become a new top-end offering from NVIDIA. Considering just how relentless these 3090 Ti rumors have been, we’re inclined to believe that the card will actually end up happening.

As reported by VideoCardz, the upcoming RTX 3090 Ti would be utilizing GDDR6X memory modules from Micron. While all GPUs RTX 3070 Ti and above in the current-gen GeForce lineup includes GDDR6X, these new modules would be both faster, and with higher capacities, allowing NVIDIA to use half the number of memory chips on the 3090 Ti for the same 24GB frame buffer of the original. 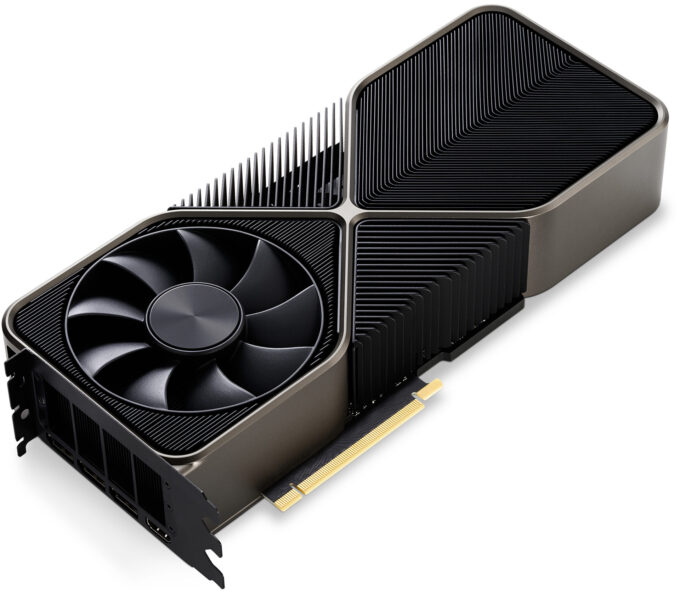 Should the RTX 3090 Ti become a reality, here’s how it could size up against the rest of the Ampere GeForces:

There are a couple of important things to note here. While the 3090 Ti could include a smaller cooler thanks to its reduced memory chip count, the fact that the GPU is has all cores unlocked – 10,752 vs. 10,496 – and is spec’d at 100W more than the original RTX 3090, makes it seem doubtful that NVIDIA would change anything up.

It’s noted that with these new GDDR6X chips, the RTX 3090 Ti could hit 1 TB/s memory bandwidth, which feels like a bit of a modest (but still appreciated) bump over the RTX 3090’s 935 GB/s. Considering that AMD’s top-end RDNA2 GPUs are equipped with GDDR6 non-X peaking at 512 GB/s, NVIDIA is definitely winning the memory bandwidth battle this gen.

Surprisingly, the rumor is that the RTX 3090 Ti could release in January, which is just around the corner, and could line up with CES – the first such event that will take place in person (and virtually) since before the COVID pandemic began. We’re not sure on what prospective pricing will be, but considering the RTX 3090 is SRP’d at $1,499, you can expect to shell out a lot of money if you want one – and that’s not even considering the scalper angle that’s plagued us the past year.

Interestingly, there’s also an RTX 3080 12GB and RTX 3070 Ti 16GB floating around the rumor mill, so it could be that NVIDIA still has a few plans for Ampere before the next GeForce generation arrives.