NVIDIA’s NVS “business graphics” lineup isn’t the most exciting in its overall portfolio, as the cards in the series are simply meant to be very stable and power a couple of displays. Given that, by default you may think that the new NVS 810 itself wouldn’t be that exciting, or interesting. You’d be wrong.

The NVS 810 might look simple, but it packs two GM107 GPUs (GTX 750 equivalent) under its hood and eight mini-DP ports at the back. 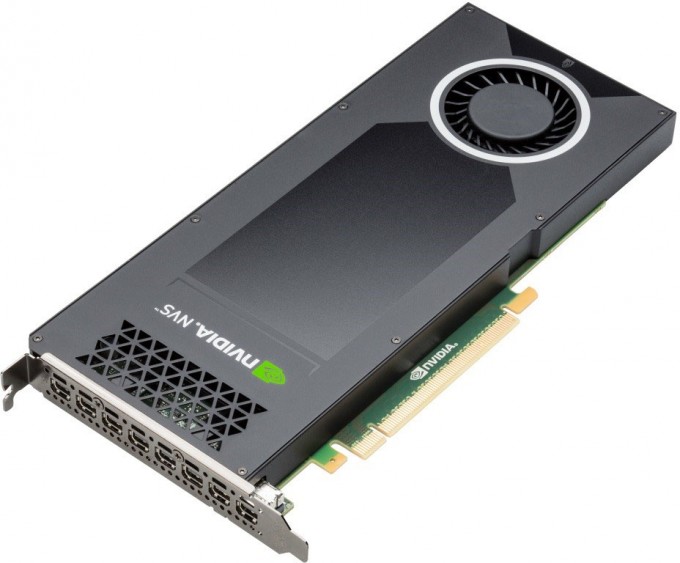 Considering the fact that the previous high-end NVS, 510, couldn’t exceed 4 maximum displays, it’s interesting to see the new one boost capabilities to 8. It doesn’t stop there, though. Breaking from tradition, NVIDIA is allowing up to four of these cards to be used in a single system, bringing the overall display capability to 32.

For large-scale display setups, the capabilities of the NVS 810 could dramatically cut down on overall costs, since fewer systems would be needed. Exceptions would be when ample computation is needed in addition to merely displaying images and video. This would include any situation where graphics or data is rendered in real-time, such as with a weather center that’s tracking trends. 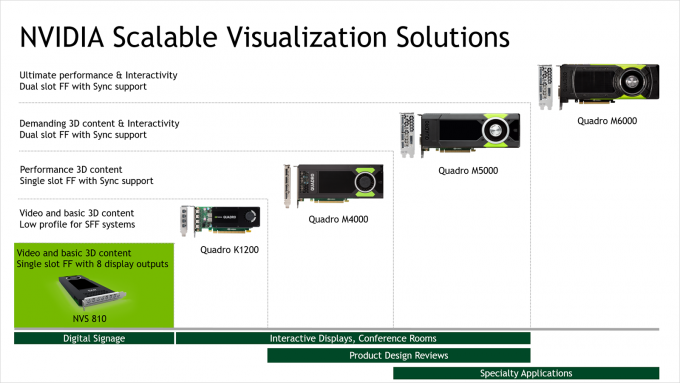 Even NVIDIA calls the NVS 810 a “little GPU”, but interestingly enough, it can in some cases best even the big gun Quadros. It’s the only card in all of NVIDIA’s lineup able to power a total of 32 displays per system – the M6000 caps at 16 due to its limitation of 4 displays per card. Also worthy of note is that while the M4000, M5000, and M6000 all require a Quadro Sync card to scale up to that many displays, the NVS 810 doesn’t. 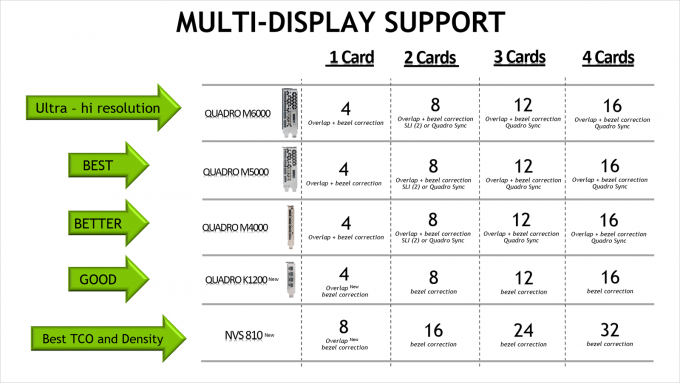 As seen in the slide above, the NVS 810 can handle overlapping (for use with projectors) with up to 8 displays, but after that point, all that’s possible is bezel correction for standard displays. That’s in contrast to the three highest Quadro cards which can take advantage of NVIDIA’s overlapping technologies right up to the maximum number of displays.

If you’re to use the NVS 810 for 8 displays, you’ll be able to take advantage of 4K resolution on each, at 30Hz. If you want to run the displays at 60Hz, you’ll have to drop down to 4 displays, thus bringing the total system limit to 16 (but still matching the bigger Quadro cards.)

With its improved capabilities, it’s no surprise that the NVS 810 draws a bit more power than the older models, but that’s likely no concern given the drop-in-the-bucket that will prove to be in comparison to all of the running displays. As mentioned above, this card is essentially two GTX 750 GPUs in a one-slot design, which is quite impressive for a graphics card in this particular space. That’d even be an interesting design on the gaming side of things!

Overall, the NVS 810 shares much of the same feature set as the current crop of Quadro cards. It can manage overlap as mentioned before, as well as take advantage of Warp & Blend, Mosaic, nView, and NVWMI. For those itching to begin decking out systems with the card, that can happen later this month when PNY begins offering it in both US and Europe. When it does become available, you can expect a price tag of $650 ~ $750.