When NVIDIA launched its GeForce RTX 3090 in 2020, it was hard to imagine that the company would find a way to release an even higher-end SKU – even though we knew that some cores were being left on the table. Well, after enjoying a long stay in Rumormill, the RTX 3090 Ti is a reality. It sports the same massive 24GB frame buffer of the RTX 3090, but bumps memory bandwidth, and offers additional cores to help deliver a ~5-10% performance increase.

As you’d expect, there are many vendors with 3090 Ti models already having been announced. The first we were tipped off to was from PNY, with its XLR8 model: 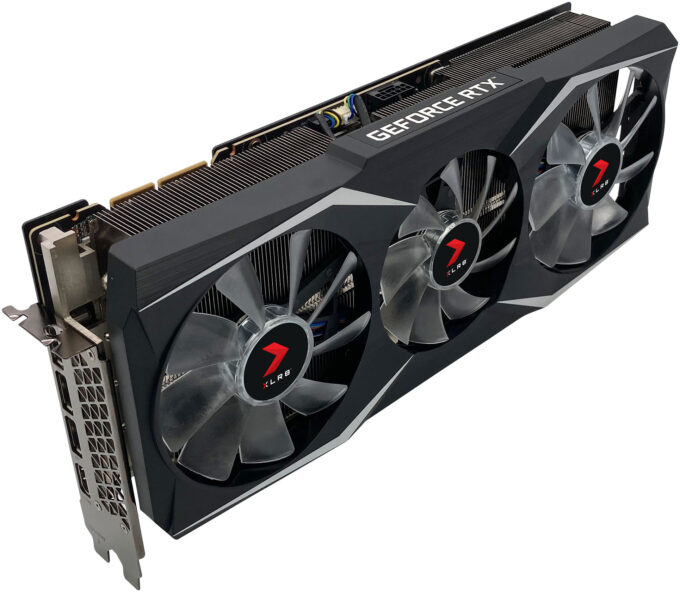 This PNY take includes the company’s EPIC-X RGB feature, which allows you to choose any color in the rainbow for the top GeForce logo, as well as each of the three fans.

While a 3090 Ti seems like a modest bump, there’s actually quite a bit different. Not only is the card now spec’d at 450W, up from 350W, it features a new power connector that adheres to PCIe 5.0 standards. To power this beast, you will need to use either an official PCIe 5.0 power connector (requiring a very modern PSU), or three separate 8-pin connectors that plug into an included adapter.

You can get a peak of the new power connector in the tweet below, which shows off some EVGA FTW3 improvements:

To give an idea of just how beefy cards packing this GPU are, take note of the fact that the same EVGA FTW3 card above has an “eLeash”, which lets you hook a cord to the top of the chassis, to relieve some of the weight. How necessary this is, we’re not sure, but it really is something else to see such a feature offered now.

Yup – you’re reading that correctly: the RTX 3090 Ti commands a $500 premium over the previous RTX 3090. If that sounds like too much, then you’d be far better off sticking with the previous RTX 3090, or even the RTX 3080 Ti, which still offers a serious kick for $800 less than the RTX 3090 Ti. We’re reaching a point where top-end GPUs are so luxury, we’re bound to see musicians start hanging them around their necks at shows and in music videos for added bling factor.

With this latest GPU launch, NVIDIA’s current-gen Ampere lineup has every base covered, except the really low-end – and it seems unlikely that we’ll see anymore slide in there. But, we also didn’t expect RTX 3090 Ti to become a reality, so ultimately, we’ll have to wait and see.