It’s been well over a decade since NVIDIA began talking about using its graphics processors for major focuses other than just gaming, and ever since we first heard the term “GPGPU”, we’ve seen so much transpire in the industry. Today, truly jaw-dropping hardware is being offered, which is something we’ve gotten used to saying following most of the big GPU launches the past decade.

AI and deep-learning is clearly growing at an alarming pace, and so it’s smart on NVIDIA’s part to have taken it so seriously for so long. We’re reaching a point where it feels like AI is everywhere, and potential is constantly being discovered across various markets. NVIDIA notes American Express is now using AI to better detect fraud, while Domino’s uses it to better predict when orders will be ready. We’ve even seen it used to improve beer.

Well, now’s the time for NVIDIA to begin certifying powerful AI-bound servers so that companies can feel confident about deploying hardware into their environment – and not waste time getting started. NVIDIA says that these certified servers are “battle-tested” with the latest software and workloads to ensure the end experience is as smooth as possible.

NVIDIA says that it stress-tests workloads on these servers of all shapes and sizes – from those that require just a portion of a GPU, to multiple compute nodes. The company is heavily implementing its Mellanox hardware in the equation here, allowing for faster transfer inside of, and outside of the server unit. 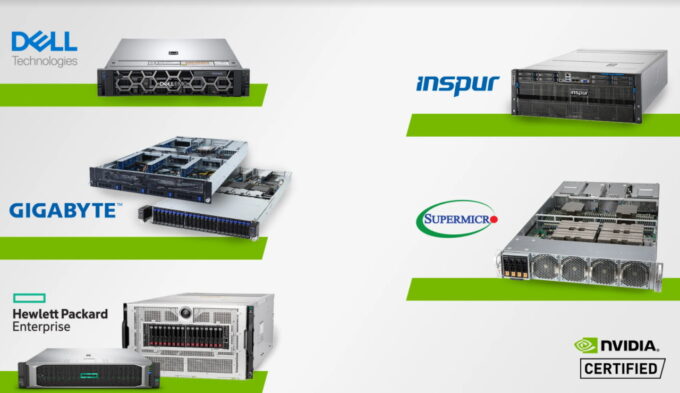 As the shot above highlights, NVIDIA has enlisted five partners to produce these NVIDIA-Certified servers: Supermicro, Dell, Inspur, GIGABYTE, and HP. The company notes that there are “14 servers from six systems makers”, and so you might notice that one of those six companies was not mentioned. It shouldn’t take long to find out who that is. NVIDIA says that these AI servers are available today, so if you have a huge need for strong AI performance, and happen to have access to deep pockets, it’s time for you to get to browsing.