NVIDIA has just rolled out version 1.3 of its popular Broadcast software, with improvements to both its effectiveness, and reduction to system impact.

On the system impact front, users of previous versions of Broadcast have noticed that their GPU would be utilized more than it should, simply just by being open (and by actively filtering), and that’s something 1.3 aims to eradicate – although to mixed effect so far, based on community input. We didn’t see a VRAM change from 1.2 to 1.3 on our Turing-based machine, with the result being about 350MB used for the input noise canceling (which seems fair for the benefit it provides).

NVIDIA notes that in previous versions of the software, someone speaking loudly, or at a higher pitch, ran the risk of having their speech removed, which is something this version should remedy. The update also supports additional capture devices: Canon EOS Webcam, Nikon Webcam, Sony Webcam, and OBS Virtual Camera.

You can grab the latest version of the software here. In looking around community forums, it seems some have had issues with this update, but ours fortunately went off without a hitch. If you have any issues, we’d recommend uninstalling Broadcast, and then reinstalling it fresh. 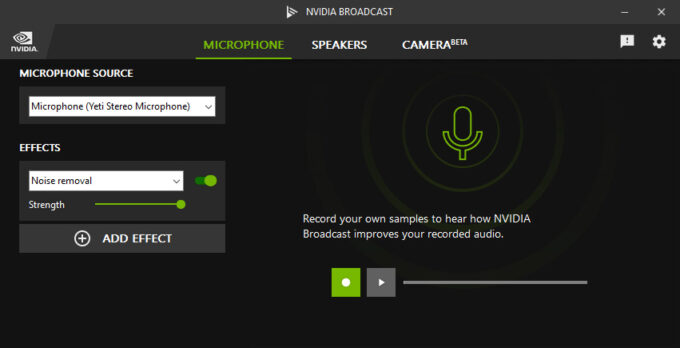 If you’re an NVIDIA user and use your microphone or webcam at all, Broadcast is well worth checking out, as in most cases, it’s ridiculously effective at what it does. If I play Apex Legends with friends and don’t use Broadcast, they will hear my air conditioner dominate my voice, but with Broadcast open, they can’t even hear it for a split second.

If you record voice-overs for videos, you can use Broadcast to effectively make your background noise non-existent. Our most recent video (we’re overdue for another) was entirely recorded with Broadcast, with A/C going, sirens blaring outside, and me sitting a foot from the mic. This type of solution really is a game-changer.