It was speculated for a while, but it’s finally here. NVIDIA at the GDC 2017 event finally shows off the specifications for the much-anticipated GeForce GTX 1080 Ti, the hyped up version of its top-end GTX 1080. Sporting the usual mix of bumped clocks and more cores, there are a couple of surprises in the mix, too.

Below is a table listing most of the details (there are still a couple of things of uncertainty), but at a glance, the GTX 1080 Ti is dancing around the Titan X. NVIDIA confirmed on the live stream that the 1080 Ti is in fact faster than the Titan X, and it’s down to a few reasons.

At first glance, the 1080 Ti will be clocked faster on the core, at least by initial specs, and shown during the live stream, had a boost clock running just over 2GHz (supposedly with room to spare). This was running at a fairly cool 66C on temps – if this is air-cooled reference cooler, we’d be surprised, but this is what was shown during the stream. 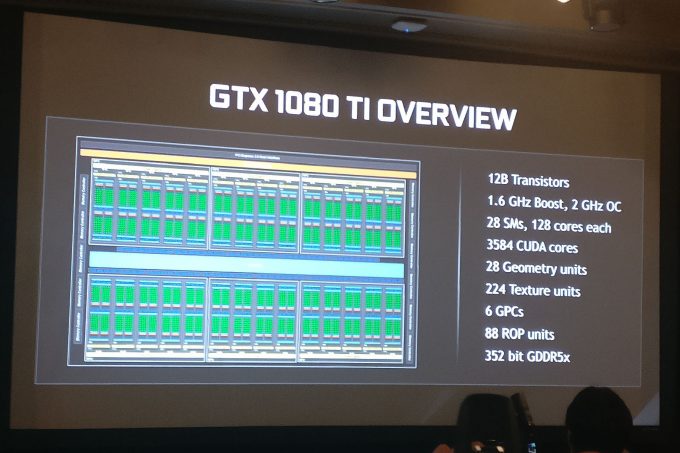 Second spec to look at, the memory is also faster but over a smaller bus. The oddball is the 11GB of G5X VRAM, hence the rather odd bus of 352-bit rather than 384-bit (missing those extra 32-bits from the 12th chip). Not shown in the table though is that there are 8 ROPs less on the 1080 Ti compared to the Titan X. However, it’s clocked at a rather impressive 11GHz, instead of 10GHz. Put it all together, and we have a very impressive card. NVIDIA also mentioned that from a performance perspective, the Ti varient is about 35% faster than the original 1080, however, no test data was shown for this, but it’s not too hard to speculate based on the spec increases alone.

If you are waiting for a price, GeForce GTX 1080 Ti will come in at $699, and will be out next week (early March). Full production has been going on, and will go on sale soon, complete with a number of test benches running at the GDC event. This is actually the same price as the GTX 1080 Founders edition at launch. Yes, this does mean the pricing will be nearly the same as the GTX 1080… but not for long.

In a surprise move, the GeForce GTX 1080 gets a price drop to $499 as of today, and retailers will be adjusting prices shortly, so if you had just bought a brand new 1080, sorry!

While the GeForce GTX 1080 Ti was the star of the show, there are numerous other announcements that will be coming up over the next day or so, as GDC continues to roll out new tech in the rendering and development scene. For now, you can be happy in the knowledge that the 1080 Ti is faster than a Titan X and nearly half the price. Now we just need to wait for benchmarks.