Over at Twitter, the official Cyberpunk 2077 account posed a simple question to NVIDIA, asking about the possibility of a limited edition graphics card. Clearly, some coordination went on in the background in advance, because NVIDIA replied quickly, ultimately giving us a teaser image of said limited edition card. Naturally, team green went hard on the blur filter in Photoshop. 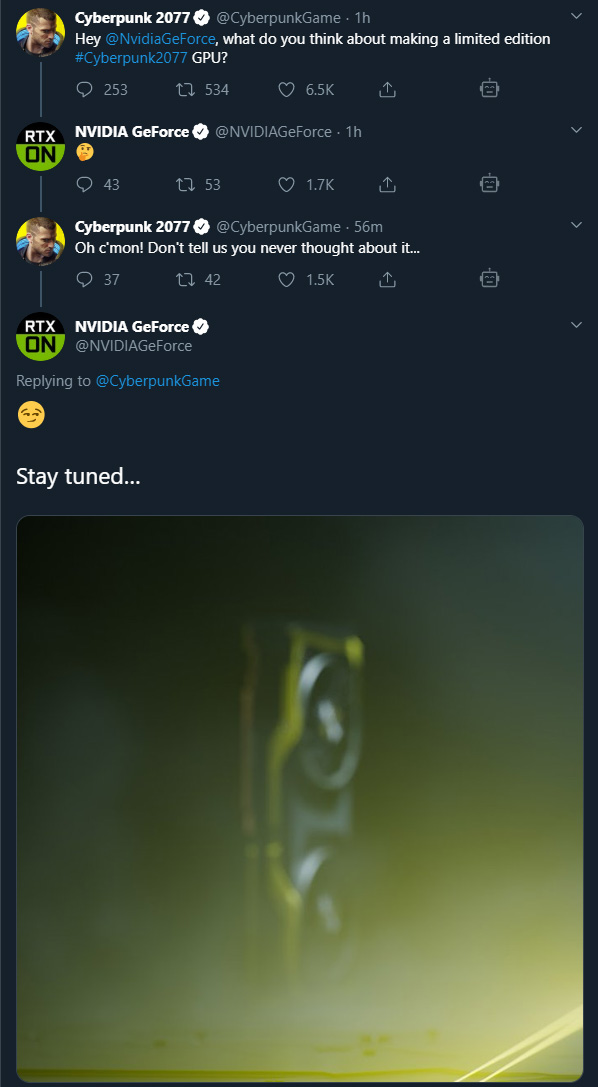 Because this is being teased as a limited edition GPU, it’s probably safe to say that whatever this card becomes, it’ll still be a Turing base, perhaps an RTX 2080 rebranded as an RTX 2077. Ampere’s name has been floating around the rumor mill for a while – multiple years, actually – and has rebound recently to suggest that next month’s GPU Technology Conference in San Jose will greet the new architecture. So, the timing is curious.

Not having inside information on NVIDIA’s plans, we’re guessing that there will in fact be a new architecture launched at GTC next month, but as with Volta, it’ll be laser-focused on scientific, financial, and other enterprise use. It could be that whatever this architecture becomes will eventually trickle down to GeForce, but we doubt NVIDIA is in any kind of hurry, as its current high-end GPUs still rule the performance charts.

We’re not even confident that a new GeForce series will arrive this year, but we’ve been known to be quite off on our assumptions, so we’ll have to wait and see what actually happens. What does seem extremely likely, though, is that this limited edition GPU isn’t going to bring about any major surprises. We hope it at least includes a copy of the game!

What do you think the specs of this card will turn out to be?