Well, we finally know what NVIDIA CEO Jensen Huang has been up to this quarantine season: baking some high-end tech in his oven. In a video that sprang up earlier today, Jensen teases that he’s got something to show us, before hauling out what appears to be a really heavy piece of upcoming DGX equipment.

Jensen refers to this piece of technical marvel as the “world’s largest graphics card”, although it does bear a huge resemblance to the motherboard layout of the DGX-1. NVIDIA treats the eight available GPUs as one, thanks to how effectively NVLink syncs them.

The GPUs on this DGX server are widely believed to be part of the Ampere family, something we have higher confidence in lately thanks to NVIDIA’s use of the word “amp” on its social media recently. Ampere is likely to be a successor to Volta rather than Turing, the data center-centric architecture used for deep learning, science, and enterprise. The naming makes more sense going from Volts to Amps.

NVIDIA hasn’t revealed any specs, but rumors have shown that GPUs could have twice as many cores as the last-gen Volta chips did, which is pretty fascinating if true. It’s easy to see why bandwidth is crucial in a design like this, and it explains why NVIDIA recently acquired Mellanox, a company entirely focused on getting data between A to B as quickly as possible. 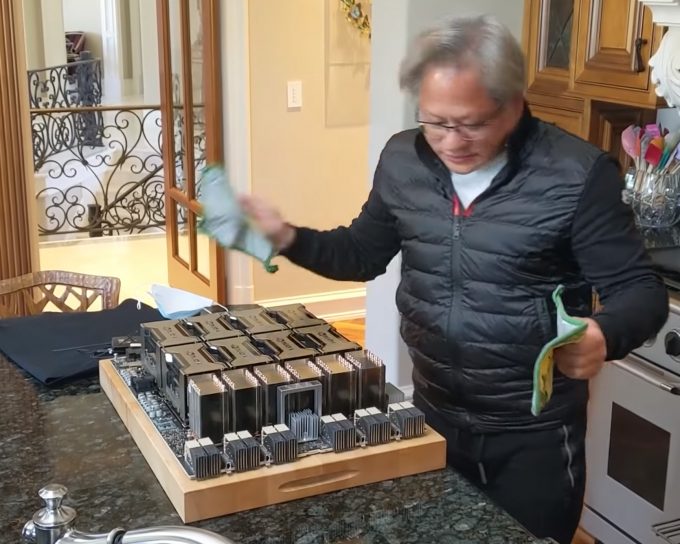 If the rumors are true, these next-gen chips are going to offer standout performance – which is why we’re cautious on believing what we’ve seen so far. The Volta-based Tesla V100 delivered 14.9 TFLOPS FP32 and 7.5 TFLOPS FP64, and it accomplishes this with 4,096 cores. The current Ampere rumor we’ve been seeing is that the flagship will have 8,192 cores. Perfect linear scaling of cores is hard to see translate to the real-world sometimes, but if you factor in additional architecture improvements, NVIDIA could effectively launch a chip twice as fast as the previous generation. Or at least close. Even thinking that seems unrealistic, so… it’s a good thing this launch is only a few days away. What could be more likely is a doubling of the number of Tensor Cores, which would impact INT8 and FP16 significantly.

If you want to play the guessing game as to the next architecture name for the Quadro and GeForce cards, let us know. They are normally named after people, such as Johannes Kepler, James Clerk Maxwell, Blaise Pascal, and Alan Turing. Newton is unlikely, but maybe Babbage or Hawking? Tesla has already been used for its compute cards.