We’re not quite sure when NVIDIA is planning to launch its next-gen GeForce series, but it feels safe to assume it’s going to be rather soon – as in, in the months ahead. Or, it could be even sooner than we expect, given that the company has just posted a teaser on social media for a “Project Beyond”. What does it mean? Your guess is as good as ours. The entire sub-10 second trailer shows some animated green beams of light, and… that’s it.

Over the past couple of months, the amount of rumor surrounding NVIDIA’s upcoming GeForce GPUs has been intense. At last check, the codename would either be Ada or Lovelace, and it will offer either an expected boost in performance, or an enormous one. The rumors have been all over the place, and so it’s naturally hard to pick and choose any of them with confidence.

If you’re in need of a new GPU now, then there’s no sense in holding off on picking one up, because there’s no telling when these new GeForces will arrive. And, of course, there’s also no guarantee that you’d be able to score one on launch day, as these things go. You may also want to scour trade marketplaces, because you may just find a great GPU at a lower-than-expected price, thanks to the fact that SRP has become the norm again.

If you want a new GPU, and are willing to wait, then you should wait unless you – like in the example above – can find a current-gen card for a great price. Because the GPU market is back to normal in way of pricing, we’re hoping that NVIDIA’s next-gen cards won’t launch with SRPs that are even higher than current-gen – as we saw with the move from Pascal to Turing. 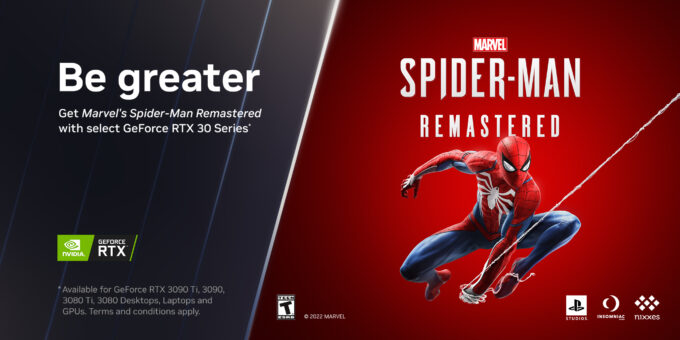 While it’s hard to suggest waiting for the next-gen NVIDIA launch when we have no clue when it’s going to happen, it is notable that NVIDIA seems keen on depleting some of its current stock, as it’s just launched a new promotion to gift Spider-Man Remastered to those who purchase a new high-end Ampere card. Cards included in the promotion are RTX 3080, RTX 3080 Ti, RTX 3090, and RTX 3090 Ti. Sadly, that does leave a bulk of the entire Ampere lineup out, and hints that NVIDIA has a good amount of high-end stock kicking around and waiting to be snatched up.

What more can be said right now? NVIDIA’s current-gen GPUs are still great, and even better if you can find an awesome deal on one. If you are in need of a new high-end card now, you can score a free copy of Spider-Man Remastered. Anyone else should probably wait. Even after the next-gen GPUs are released, that will hopefully mean previous-gen GPUs will become even more affordable.

Update: NVIDIA has since announced that it’s hosting a livestream on September 20 of Jensen Huang’s GTC keynote, and it appears it will tell us more about this “Project Beyond”. You can find all of the relevant links and the schedule here.