God bless the newshounds over at The Tech Report. Upon discovering a DigiTimes article alleging that NVIDIA planned to pull out of the lucrative motherboard chipset market, they went straight to NVIDIA platform products PR chief Bryan Del Rizzo for a fact-check. NVIDIA quickly released a statement denying DigiTimes’ allegations, calling the story “groundless” and reaffirming that NVIDIA continues to maintain greater than 60% market share in AMD platform IGP solutions, and that their SLI platform continues to be the “preferred” platform for multi-GPU gaming, likely riding on NVIDIA’s dominance in the market for enthusiast video cards.

So, why might such a rumor have been so believable? Many anticipate that Intel’s Nehalem and AMD’s Fusion CPU products will take direct aim at integrated-graphics motherboard chipsets, leaving them essentially irrelevant. Back in January, NVIDIA told journalists that all their new chipsets would henceforth include an integrated GPU and be Hybrid-SLI capable, a feature that would be unnecessary for CPUs that offer their own integrated graphics cores. In addition, Nvidia’s SLI solution isn’t the most well-regarded when it comes to Vista compatibility, and the company’s stock recently took a hit when they admitted that a large number of GeForce 8-series onboard and integrated graphics products were ‘defective’ – mainly having to do with thermal issues causing their untimely demise.

Still, NVIDIA’s motherboard chipset lineup is one of the best things the company has going for it in the all-important consumer sector, and we expect to continue seeing NVIDIA integrated-graphics chipsets for a long time to come. 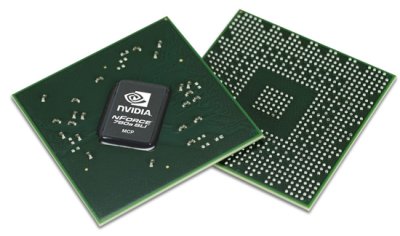