A poorly kept secret over a new Pascal-based GeForce card denoting a Ti series moniker has now become official with the release of the GeForce GTX 1070 Ti. It sits itself between the GTX 1070 and GTX 1080 in terms of performance, and has its sights set firmly on AMD’s RX Vega 56.

The only major difference between the 1070 Ti and 1080 is the memory, dropping from GDDR5X down to GDDR5, the speed goes from 10GHz down to 8GHz, which is fairly significant. However, this is unlikely to impede performance too much, considering the number of cores available. Considering the similarities between the two, there is probably a very good chance that AIB partners are going to launch with a number of pre-overclocked boards.

Yes, overclocking. Despite some very embellished rumors that NVIDIA would be disabling overclocking capabilities on these new 1070 Ti cards, it turns out no such limitations will exist. Seriously, if it did, that would be a pretty bold statement for NVIDIA to make, and something that would not go down well – so rest assured, no limits on overclocking. 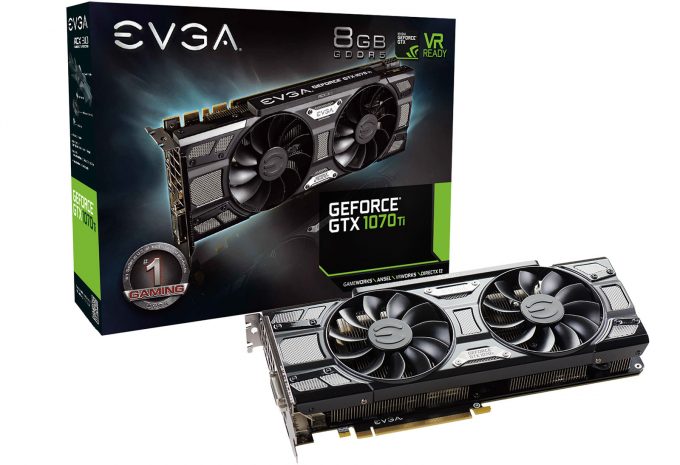 The GTX 1070 Ti will be launching in the usual array of Founders Editions first, with some non-reference designs creeping in later, no doubt pre-overclocked to match the GTX 1080 where possible (although these will likely be binned chips and will entail a premium too).

For reference, there won’t be any launch reviews yet, because NVIDIA is leaving the cards up to partners to sample. Founder’s Edition pricing has an MSRP of $450, but you can pretty much throw that number out the window since we’re still in the middle of a cryptocurrency mining craze. This price also puts it within $50 of the GTX 1080 as well (official pricing, not inflated). A number of partners have some card designs ready to go, including the likes of EVGA, ASUS, MSI and Zotac. The GeForce GTX 1070 Ti will be available from November 2nd at your usual retailers, but pre-orders are available from Newegg, and later, Amazon.