We talked earlier this week about all that NVIDIA’s R337 GeForce driver for Windows brings to the table, but little did we realize at the time, the Linux R337 driver also got a fair amount of love. At the forefront, the driver adds support for NVIDIA’s latest mobile GPUs, and also takes care of numerous bugs. Past that, R337 also reintroduces overclocking capabilities for Fermi-based cards and newer.

Michael at Phoronix has discovered that enabling the overclocking function in R337 requires a different step than it used to. You’ll still need to edit your xorg.conf file, though, adding an Option modifier with “Coolbits” “8”, as seen in the example below.

If “12” is used, fan controls will be opened up as well. After saving this new option, and then rebooting or restarting X, you should see some brand-new options in the PowerMizer section of NVIDIA’s settings GUI: 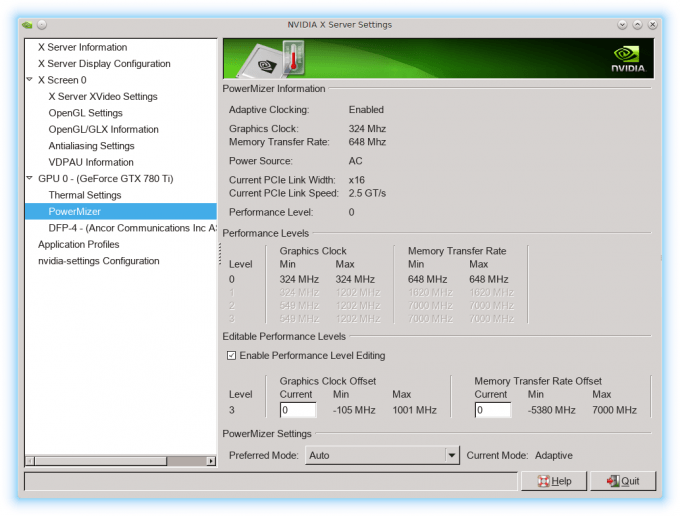 In future releases, I hope that NVIDIA will forego the need to edit the xorg configuration. While that’s easy enough to do, it’s hardly intuitive. There’s a mammoth warning about the dangers of overclocking when enabling the feature, which should be enough.

Regardless of all that, though, it’s great to see overclocking functionality return. NVIDIA deserves some kudos for that.