This past fall, NVIDIA announced the latest top-end SKU for its workstation lineup: NVIDIA RTX A6000. Because NVIDIA’s been changing how some of its brand names are used, this card doesn’t carry the Quadro name, despite following in the same footsteps of previous-gen Quadros. Nonetheless, a name only matters so much; what’s most intriguing about the A6000 is how it will benefit workloads over using the previous Quadro reigning champs: RTX 6000 and RTX 8000. 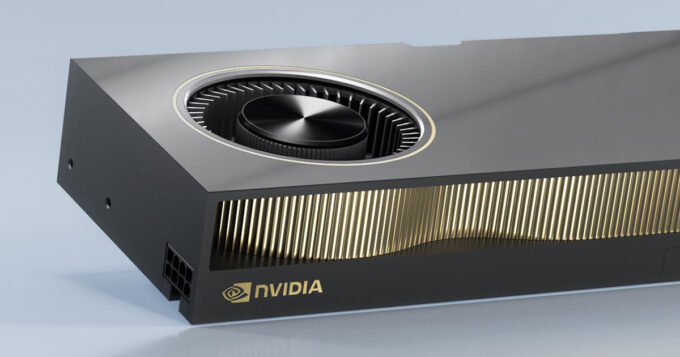 While the A6000 was announced months ago, it’s only just starting to become available. The folks at Lambda have wasted little time putting one of theirs to the test with a couple of deep-learning workloads, and depending on how you look at things, the performance improvements over the last-gen cards is pretty impressive.

Benchmarks were run through both PyTorch and TensorFlow, and ultimately, the A6000 does appear to be the safest bet for those aiming to focus their work around deep-learning, but can’t or don’t need to go with the even faster A100. Here’s an example of a PyTorch test: 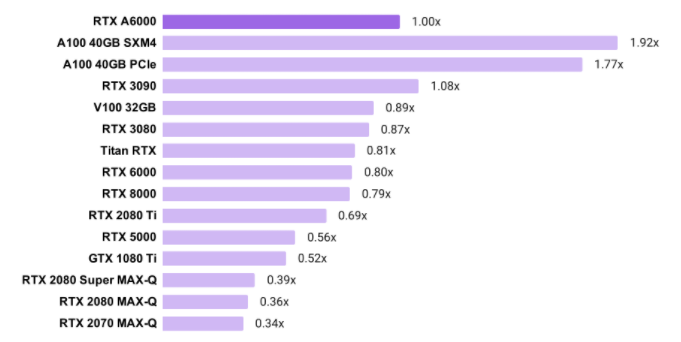 From the get-go, how about that GeForce RTX 3090? The focus of this story might be the A6000, but when a GPU costing a fraction of the A6000 manages to outperform it in this test, that’s really saying something. There are some things to bear in mind, however: the RTX A6000 includes 48GB of memory, whereas the RTX 3090 has only half. In that case, pairing up two RTX 3090s with NVLink to secure that same 48GB memory while also bolstering performance sounds dreamy – assuming your workload scales seamlessly with multiple GPUs.

In that particular PyTorch CNN test, the last-gen Turing-based RTX 6000 hit 80% of the performance target of the A6000. However, in another chart seen on the site, this time focusing on language model training, the RTX 6000 fell to 37% of the A6000’s performance, something that could be owed to the halved memory. That said, in the TensorFlow test, the 48GB RTX 8000 hit 65% of the performance of the A6000, so it’s clear NVIDIA has a lot of efficiency improvement in its Ampere upgrade than just a bump to the memory.

Ultimately, while these tests revolve around the A6000, the gaming-focused RTX 3090 seems to be a clear winner for those wanting to maximize their overall performance. That said, this of course assumes you don’t mind using a gaming card for serious purposes, and don’t need to make use of error correction memory. While results like these might take away from the new Quadro non-Quadro a little bit, it’s nice to see that NVIDIA is not crippling deep-learning performance on its gaming cards to allow those with stricter bank accounts to still get great work done.