After leaving a meeting with NZXT at last year’s Computex, I felt a little bit underwhelmed. Not by the product, but rather because after seeing all I had seen, I was unable to share photos of it all, and thus had to resort to explaining some of the products rather than letting the photos mostly speak for themselves. This year was totally different, thankfully.

Like our Corsair coverage, what we’ll talk about from NZXT will come in spurts for the sake of time and space. The first product the company showed off to us was an upcoming high-end chassis called the Phantom. I’m not quite sure of the dimensions, but this thing is rather large – though still designed for an ATX motherboard, not eATX. 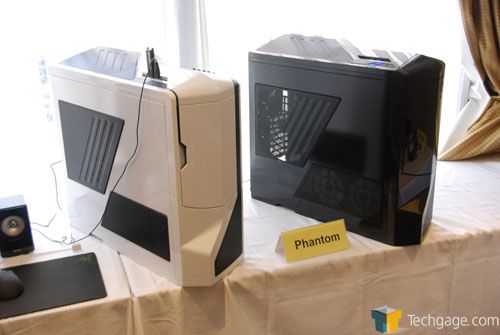 The Phantom includes a couple of features that the company is proud of, many of which I can’t even recall at this point. One of the main features of the chassis is of course for good airflow, and as a result, you’ll find many 220mm fans on the top, bottom and of course, sides. On top is the IO panel you’ve come to expect, and also an integrated fan controller which can control five different fans at different locations.

As is the focus of many other chassis being shown off, this one aims to offer ample room inside in order to make sure you’ll never run into a problem with components hitting each other, or the chassis. One example is the amount of room available to the graphics card. Also, to ease with installation of your parts, NZXT has developed various mechanisms to make the entire install mostly screwless. 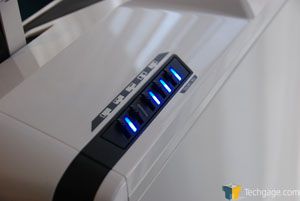 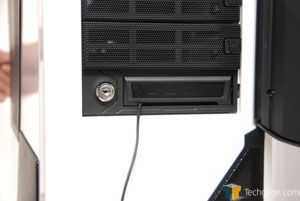 There were other features of the chassis which I unfortunately forget due to being shown so much in a little bit of time, but from what I saw, the Phantom is going to be interesting. The release date isn’t solidified, but you could likely expect to see it be launched this summer, and for between $200 – $250.

As a bonus mention, NZXT also showed us a new accessory it will be releasing in the near-future, which you can see in the above right image. Those familiar with Cooler Master’s LAN-inspired chassis will likely know about the peripheral security feature they have. NZXT improves on this by allowing this box to be installed into any 3.5″ bay on any chassis to accomplish the same goal.

In the image, you can see that one cable goes into the door flap, which is how it remains secure. That small door will not open without a key. Once at a LAN party, you unlock this door, plug your peripherals in, lock it, and you’re good to go. Tres simple.