I mentioned the other day that where SSDs are concerned, OCZ tends to be at the forefront of things, and has been since the beginning. To prove that even further, the company has finally announced its HSDL storage interface, which makes current SSDs, even some PCI Express solutions, look a little bit on the “meh” side.

That’s of course a bit of an exaggeration, as all SSDs offer great performance for the most part, but tentative HDSL products kick things up a notch. Anand had a look at a 240GB model of OCZ’s IBIS series, and compared to the ultra-fast RevoDrive 250GB, the HDSL card proved to have a 60% faster sequential read and a 50% faster sequential write in Iometer (with a queue depth of 32).

In PCMark Vantage terms, OCZ’s “IBIS” scored 53,424 in the HDD Suite, while Crucial’s speedy RealSSD C300 256GB scored 41,344. That’s quite a boost! Though OCZ itself hasn’t revealed exact performance specs for each of its models, it’s speculated that they will have an IOPS performance of over 100,000, which for those wondering, is double the IOPS performance on the Vertex 2.

As blazing-fast as these SSDs can be, there are some caveats to note. First is the fact that as a new technology, and one that screams cutting-edge and high-performance, entry is not cheap. The 100GB model of the IBIS carries an SRP of $529, and goes up to a 960GB model for $2,799. But for those that the IBIS models and HSDL interface are for, pricing tends to not be a major concern.

The other thing to keep in mind is that HSDL is a brand-new interface and there’s just not much support for it outside of OCZ’s own product-lines. Therefore, you’ll need an add-in card to enable the connection, which utilizes the PCI Express bus. Fortunately, one will be included free with each IBIS drive.

What impresses me most about the IBIS and its HSDL is just how far we’ve come with storage over the past couple of years. A mere five years ago, our hard drives used to be a major bottleneck, but today, if you are willing to spend the money, that’s no longer the case. 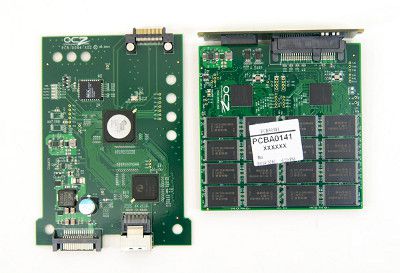 Instead of relying on a SATA controller on your motherboard, HSDL SSDs feature a 4-lane PCIe SATA controller on the drive itself. HSDL is essentially a PCIe cable standard that uses a standard SAS cable to carry a 4 PCIe lanes between a SSD and your motherboard. On the system side you’ll just need a dumb card with some amount of logic to grab the cable and fan the signals out to a PCIe slot.