If you guessed that there would be a lot of SSD talk at Computex, you’d be spot on. The number of companies showing off their own solid-state products seems limitless, although OCZ is one of the few who showed something a wee bit different. One of the biggest complaints (aside from the price) about SSDs is with regards to density, but with their Colossus, that issue is gone.

Though still a work-in-progress, the Colossus shares the identical form-factor as a standard mechanical hard drive, but inside are two 500GB SSDs in RAID 0, for incredible speed. Their achievement so far has been 265MB/s read, but their ultimate goal is to see the exact same for the write speed. Alright, you can start drooling.

As it stands now, the drive features a <0.2ms seek time and weighs 400gm. So what about the company’s much-anticipated Z-Drive? For those who want mind-boggling speed, that’s the only choice, although right now it’s hard to find in stock. That should change shortly. Initial stock didn’t live up to the company’s expectations, so they must be tweaked (and thankfully so for such an expensive product). 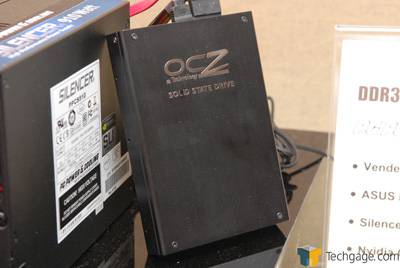 In talking to a few different SSD vendors at the show, the overall consensus is that PCI-E SSDs are the future, not S-ATA-based offerings. The reasoning is clear… the speed potential of such drives is incredible, and equipped with such a drive removes a major bottleneck in your computing. It will take a long while for that to become a standard, however, but it should be worth the wait.