Although the product at OCZ’s booth to really catch our eye was the consumer-grade Revo PCI-Express solid-state disk, the company’s upcoming support for the HSDL interface standard was also rather interesting and worth noting. Haven’t heard of HSDL? Don’t worry… neither did I until I saw it at the company’s booth.

HSDL stands for “High-Speed Data Link” and refers to the actual connector that it represents. Like a S-ATA connector, HSDL aims to deliver faster speeds, and at the current time, it looks as though it’s going to be targeting the enterprise environment at the get-go. Whether or not we’ll see HDSL components in our desktop in the future, it’s uncertain, but it could happen. 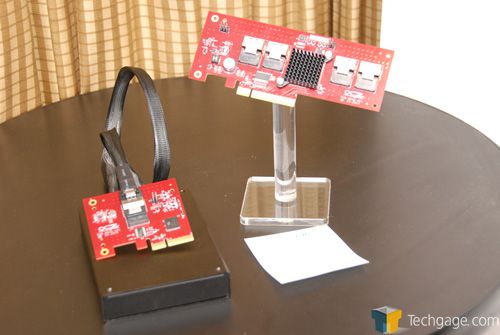 Although the S-ATA 3.0 standard is fine for the time-being, it caps out at a theoretical 750MB/s, while an HDSL storage SSD from OCZ managed to push the interface to 930MB/s read and 790MB/s. Clearly, these speeds are too much for S-ATA 3.0, but seemingly just right for HSDL.

Ideally, having a super-fast connector in our PC’s like HSDL seems like a good idea, because for similar speeds, our only current option is to use a PCI-E card, which isn’t quite as convenient as using a real drive. But even if HDSL drives were commercially available today, we’d still need to equip ourselves with a PCI-Express add-in card, so it’s not as though the situation would be much better.

If HDSL does take off, though, you might have to get used to hearing a lot more about it as time goes on. It will be interesting to see, especially since S-ATA 3.0 didn’t exactly deliver the monumental leap we would have hoped for.