Take a guess at the best possible way to discover information from any company today. Subscribe to its press release list? Nope. Contact the company? Nope. In the age of social media, it seems like the best way is to subscribe to that company’s Facebook page, Twitter page, Flickr page, et cetera. Remember when NVIDIA first unveiled proof of DX11 on GF100? It released that via Flickr. Then there was EVGA who teased its W555 dual-socket motherboard via Twitpic.

As you can probably guess, I don’t subscribe to any single company in any of these services, but I did happen to stumble on NVIDIA’s Facebook page where it finally unveiled the model names for the upcoming Fermi-based cards. GTX 380? Think again. The launch high-end model will be the GTX 480, while the next-step-down will be the GTX 470.

You might be asking yourself, “Why is the sky blue?”, or even possibly, “What happened to the GTX 300 series?!”, and both are good questions. I’ll tackle the latter. NVIDIA hasn’t yet admitted to the strange omission of an entire series, but speculation is abound, and one of the best theories I found was that because Fermi is such a leap in architecture and performance, NVIDIA felt it was necessary to prove it by skipping an entire generation. 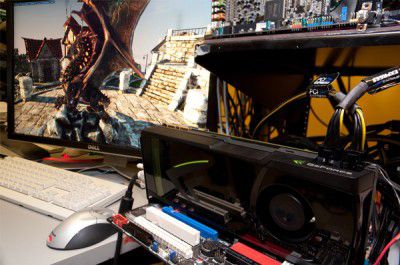 Of course, I find this just a wee bit ironic, given that for a lot of the company’s models, the innate architecture goes back two or three generations. But, I digress. If the reasoning is correct, then Fermi should really bring some impressive numbers to the table, and features. Another theory is that NVIDIA didn’t want to confuse its desktop chips with its 300 mobile offerings (which happen to be based on GT 200), and that’s also a good one.

If you happened to have missed it, we posted an in-depth look at NVIDIA’s upcoming architecture a couple of weeks ago. I highly recommend reading through, because there’s a lot to be excited over.

NVIDIA remains tight-lipped with regards to a launch date, but during our meeting with the company last month, the projected date seemed to hover around “early March”, so hopefully, we’ll see a full roll-out during that month.