Our Experiences With 360Hz Gaming At CES

At CES a couple of weeks ago, NVIDIA unveiled some forthcoming 360Hz G-SYNC monitors, allowing press who visited its suite at the Wynn to go hands-on with them. Before the event, I felt like the difference between 240Hz and 360Hz would be hard to spot, but fortunately for me, NVIDIA had a dual screen setup available to show that exact difference.

Unfortunately, we somehow managed to leave NVIDIA’s suite without taking a single photo of the setup, and we’re going to use the excuse that we were so intrigued, we simply forgot. I don’t consider myself to be an expert gamer in any way, though I’m probably not the worst out there. Even so, when time comes to test reflexes, I don’t usually do very well. It just so happens that high-refresh can fix that.

In one demo, NVIDIA had a 60Hz screen next to a 360Hz, and while that represents an enormous difference, it’s a fair comparison since the vast majority of aging monitors out there are only 60Hz. In Counter-Strike: Global Offensive, a training level was used which let the player aim down the sights of a sniper, and pick off a terrorist who quickly jumps across the sliver of open door.

With the 60Hz monitor, there are very few frames that will be rendered during the time that the terrorist jumps across the door, and during this demo, I unsurprisingly managed to go all ten attempts without hitting the opponent. On the 360Hz monitor, things changed dramatically – I suddenly soared to 7 out of 10. A scoreboard was kept on hand that showed I wasn’t alone with my improvements.

Of course, 60Hz vs. 360Hz is massive, so a tighter delta would likely reveal less of an advantage. It did prove, though, that 60Hz is simply not enough for competitive gameplay. A higher refresh actually means you have more overall control. We see lots of online games shun ultrawide, but to us, it almost feels like high refresh can give you a better advantage, given what we’ve experienced at NVIDIA’s suite.

The second demo compared 240Hz to 360Hz, using the Dota 2 scrolling demo found over at Blur Busters. If you have a monitor at over 60Hz, this is a test that’s worth giving a go, because it highlights very well what a panning game can look like. At 240Hz, this demo looked smooth, but not in comparison to the 360Hz. In the former, the names above enemy heads couldn’t be read – but add 50% more frames to the mix? Suddenly, those names can in fact be read without much issue. 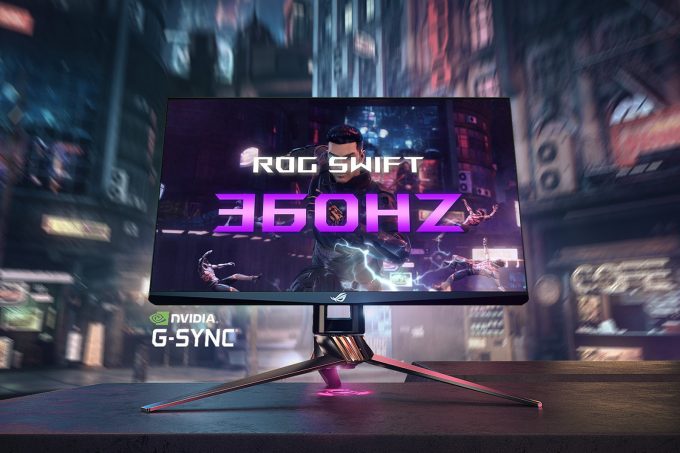 As with G-SYNC itself, it’s really hard to appreciate high-FPS unless you can see it in person. I say this as someone who didn’t even really care about high refresh until Destiny 2 came out. I played the game for the first month with a 1440p 144Hz monitor, and truly appreciated the difference when I moved back to a 4K/60. For some games, that won’t matter to me, since I am not a competitive gamer, but if I were a competitive gamer, I wouldn’t hesitate to use a lower-res but high-refresh panel.

While many have liked high-refresh monitors for a while, it seems like there has really been an explosion of them over the past couple of years, due likely to the same explosion we’ve seen with the popularity of esports. Today, it’s easy to find a gaming laptop that goes well beyond 60Hz, so while it may have taken a while, it’s nice to finally see some major progress being made.

As for the 360Hz panels in particular, though, I wouldn’t expect them to come cheap when they arrive later this year – but that’s unlikely to be a surprise to anyone. Bleeding-edge tech doesn’t come cheap, and beyond that, you also need a game that isn’t CPU bottlenecked and can actually hit such high frame rates. CS: GO might be challenging on certain platforms, while Rainbow Six: Siege should be easier. We just know that we can’t wait for these monitors to hit the market, and see if they really do catch on in the esports world.