Intel yesterday announced a few organizational changes, and one of the most notable is the loss of one of their top executives, Mr. Pat Gelsinger. Pat was the General Manager of the Digital Enterprise Group for the company, and after 30 years of breathing in microchips and chipsets, he has decided to try new things. He has become the President and Chief Operating Officer for storage company EMC’s Information Infrastructure Products.

There is some speculation as to why Pat would decide to leave Intel after dedicating 30 years of his life there, but similar to rumors about why Craig Barrett retired this past May, Gelsinger may not have liked the change-ups that Intel was planning to make. Either way, the company has certainly lost one of their most notable executives and public speakers.

Pat joined Intel in 1979, where he had numerous jobs throughout the years, including heading up Intel Labs, and also becoming the company’s first Chief Technology Officer. Prior to 1992, he become well-known for being the general manager of the division which was responsible for the Intel 486, Intel DX2 and also the Pentium Pro. Do any of those names awaken any nostalgia?

Alongside his work at Intel, Pat also holds six patents related to the area of computer architecture and communications, and also has published numerous technical publications, including “Programming the 80386” (a must-read by today’s standards, I’m sure!). As Pat gave some great keynotes at previous IDF’s, I was looking forward to seeing him there next week, but this was quite the shake-up. Good luck in the new position, Pat! 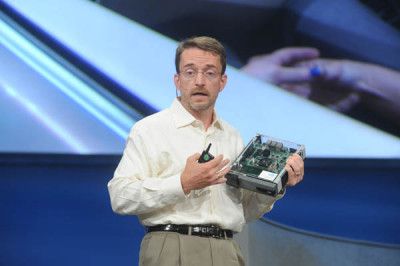 Intel also announced today that Pat Gelsinger and Bruce Sewell have decided to leave the company to pursue other opportunities. Gelsinger co-managed DEG and Sewell served as Intel’s general counsel. Suzan Miller, currently deputy general counsel, will take the role of interim general counsel. “We thank Pat and Bruce for many years of service to Intel and wish them well in their future endeavors,” said Otellini.