PCIe 6.0 Specification Slated For Release In 2021

Five months ago (to the day), we explored what PCIe 4.0 and its 5.0 successor will bring to the table in terms of raw bandwidth. At the time, it felt funny talking about 5.0 when 4.0 wasn’t even been commercially available to regular consumers yet, but that’s the way tech goes sometimes. Today, PCI-SIG must be having a good laugh, because ahead of AMD’s PCIe 4.0 support launching alongside Zen 2 (on July 7), the consortium has announced the next-next-next-gen PCIe: 6.0.

#PCISIG is proud to announce the upcoming #PCIExpress 6.0 specification targeted for release in 2021. #PCIe 6.0 will reach 64GT/s, utilize PAM-4 and pave the way for future innovation. Read the press release to discover the features: https://t.co/JonFWesLHi #PCISIGDevCon19 pic.twitter.com/ZtX6kkbdh8

Since the inception of PCIe, performance has doubled from generation to generation. The 6.0 spec doesn’t change that, hitting 64 GT/s raw bit rate, and 256 GB/s for an x16 slot. The fact that we’re talking about 6.0 before 4.0 hits the mainstream tells you that PCI-SIG is wasting no time in developing standards ahead of the time when such bandwidth is truly needed. At Computex, we were told by some vendors to expect the 4.0 generation to transition fairly quickly to 5.0, especially compared to the eight-year gap between 3.0 and 4.0. 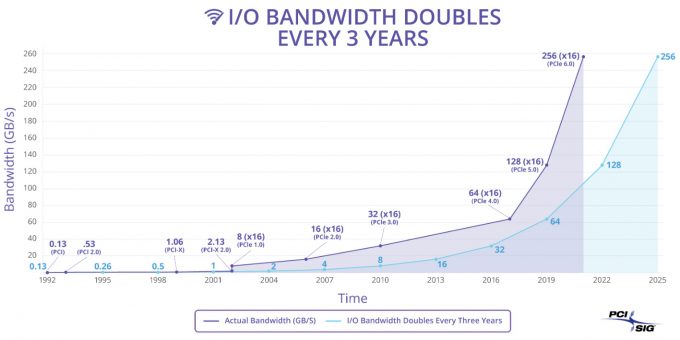 Given the stated performance by PCI-SIG for 6.0, the same math used to calculate the past few iterations can be used for 6.0. That gives us 126.08 GB/s per direction, which falls a few gigabytes below PCI-SIG’s 256 GB/s bi-directional rating, but we’re sure some math could explain the discrepency.

When we visited GIGABYTE’s suite at Computex, we saw a PCIe 4.0 add-in card that enables four NVMe SSDs to be installed in a RAID configuration to deliver extremely fast bandwidth. The demo shown hit about 15GB/s for both read and write, which is quite a bump from current ~3GB/s NVMe options, and miles ahead of SATA’s typical ~500MB/s.

Regular consumers may not need such insane bandwidth anytime “soon”, but many servers can’t get enough. The upside for regular folk is that we’re likely to reach a point where there’s so much bandwidth available, we’d have a truly hard time taking full advantage of what we’re given. It’s unlikely we’ll see a considerable advantage from GPUs with PCIe 4.0 for some time, so 6.0 seems pretty alright.

It’s important to note that while the 6.0 specification is expected for 2021, the actual products built around it won’t come for another year or so afterwards. That means 4.0 and even 5.0 will have comfortable time to deliver products before the following gen. Thankfully, PCIe 6.0 retains full backwards compatibility with all earlier versions, so your gear isn’t going to go extinct overnight.