Ever install an app and then two or three hours later come back up for air? I experienced this last night after stumbling upon GO Launcher EX, a robust app for Android that allows you to perform an ‘extreme makeover’ to make it more functional and more fun to use. It brings a lot to the table and has some of the best polish I’ve ever seen for an Android app, making it the most robust launcher replacement available.

I claim that as someone who’s used a variety of launchers in the past – I have never been left completely satisfied. But with GO Launcher EX, all of my expectations have been exceeded – something I am blown away by given the fact that this is a free app.

For those who might not be aware of what a launcher is, it’s in effect the front-end of your phone. Much like how Windows looks different from OS X, you can install different launchers on your Android device to make it not only look different but feel and act different as well. With GO Launcher EX, things can be modified to such a degree that I’d go as far as to call it a “Total Conversion”. 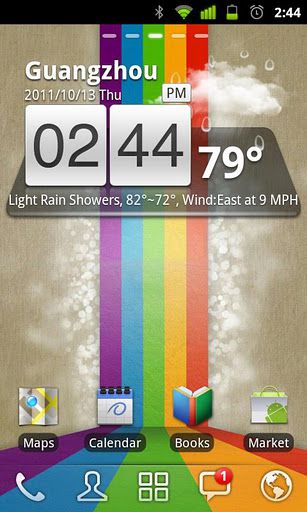 One thing to point out right off the bat is that GO Launcher EX isn’t filled to the brim with features or bloat, but rather is modular in design allowing you to install what you want and ignore what you don’t. This is an upside, but it has a downside; each of the available extensions are installed as separate applications, so it somewhat adds to the clutter of your applications list. For some, the flexibility offered might override that downside.

In its fresh-installed state, GO Launcher EX looks great. It’s polished as mentioned above, and alone features the best-looking aesthetics I’ve ever seen from an Android launcher. But going further, various themes can be purchased or installed for free to better suit your mood or tastes. There are quite a few of these available, and it’s in effect the way that the developers choose to make their money. 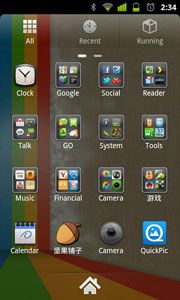 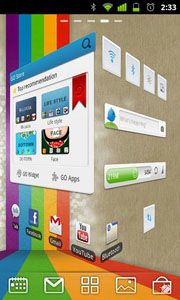 There are so many features with GO Launcher EX that I can’t even begin to get into them for this simple news post, but what I can say is that it’s not only the aesthetics that have been developed with care, but the features as well. Managing icons on a page can be a chore, especially for someone like me who likes to list their games in alphabetical order. But with GO Launcher EX, I can drag an icon to where I want it to be, and then the rest will adjust automatically. In addition, you can do other minor things like add multiple icons to one of your pages at once, hide apps from the drawer and so forth.

I’ll be honest – I am having a hard time finding a fault with this app. Each time I ran into a situation where I thought, “Oh, it can’t do this.”, I ended up finding out that it could. In one example, I wanted to resize a widget, and to my surprise, I could. In the left shot below, with any previous launcher I used I could not fit the four widgets on the one screen. As a result I had large gaps. But with GO Launcher EX, I was able to resize one just a smidgen in order to fit the fourth widget in there.

The theme seen above is the default, with the theme below being one I purchased, called “Neon“:

About 20 or so other themes can be seen on the developer’s app page.

Another interesting thing that GO Launcher EX allows you to do is easily add additional pages to your desktop. Most launchers stick to only five, while this one defaults to seven. However, you can go up as high as nine, and of these, you are able to click on the little house icon underneath any page to designate that as your home page. You can of course rearrange pages this way also. 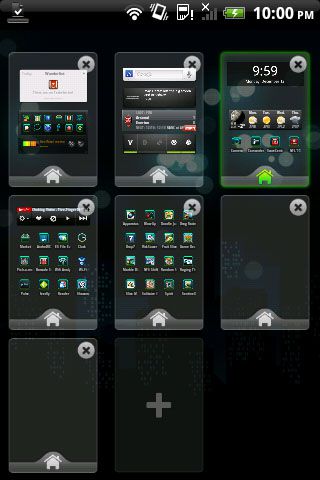 After some of my app reviews, I might quip, “the best part is that it’s free”, but in the case here, the best part is that the app is freaking awesome. I won’t tell the devs, but this is an app I’d pay $10 for in a heartbeat, because it’s polished, allows a ton of flexibility and functionality, and is fun to use. So far, it’s also performed well, too, with no sign of sluggish performance. So, if you want to overhaul your Android device, check GO Launcher EX out. And if you want apps to go with it, you can peruse a large official list here.