As we’re working through more benchmarks to post our full look at NVIDIA’s Quadro RTX 6000 graphics card, we’re reminded that we forgot to talk about PNY’s recent release of passively-cooled Quadro RTX graphics cards – Quadro SKUs without video connectors. That’s not something we see everyday! 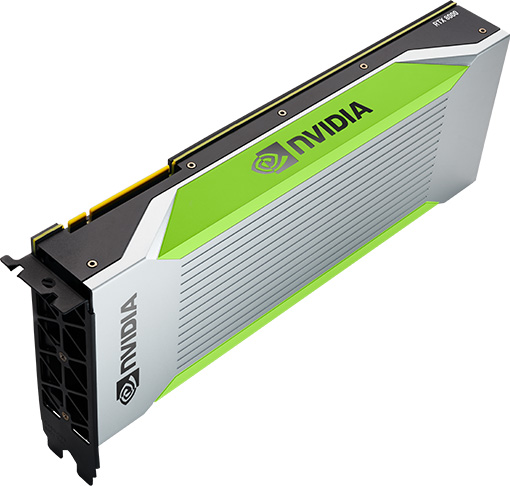 Going all-in with passive cooling means that these Quadro RTXs are going to run a lot warmer than regular models, which in turn results in slightly lowered overall performance – from 16.3 TFLOPS single-precision, down to 14.9 TFLOPS. Without video connectors, it’s clear that this is not a normal product; it could be used by a regular user as a secondary GPU explicitly for workstation-accelerated compute, or used in a datacenter where a fully unlocked option like those in the Tesla series are not needed.

At the moment, NVIDIA doesn’t have low-end Turing answers to its low-end Pascal series, which means that those models leading up to the Quadro P2000 are still relevant. That said, the performance delta between the P2000 and something like the RTX 4000 is extreme, so we really hope to see NVIDIA bring some more Turing-equipped GPUs to the low-end soon.

Speaking of pricing, we’re not sure how these passive Quadro RTX cards will be priced in relation to the regular SKUs. Because it’s a special purpose product, we’re not sure if it’d cost more simply because it’s passive, even if it can’t reach the same peak performance. As always, it’s good that these options exist, even if they are not for everyone. And who doesn’t love the thought of that much power passively-cooled?