Seagate’s Momentus XT mobile hard drive is one-of-a-kind on the consumer side of things, as it pairs a mechanical drive with some NAND flash commonly found in SSDs, and in the end delivers great performance. It’s effective because it allows the most common files to be read from the flash, while the rest of the data is on the hard drive portion. As we discovered in our review a couple of months ago, this design can be incredibly effective.

Unfortunately for regular users, though, it seems that the XT drives have a rather serious flaw. Due to a power management feature being overly-aggressive, the Momentus XT drives have the tendency to power up and down far more often than is truly needed, effectively hurting performance and even causing the drive to make audible noises. In some cases, the power up/down states on some user’s drives numbered in the tens of thousands, and clearly… that’s a problem.

That’s the downside, and yes, there’s an upside. Being that this is more of a software issue, Seagate has released a firmware update that can help remedy the situation, so if you use a Momentus XT drive, it’s highly recommended you upgrade, even if you are not experiencing problems personally (because you will like do so eventually).

If you have a drive that’s been spun up and down thousands of times though, a firmware update might not be all that’s needed, because the damage could be done. If I had a drive that spun up and down that many times, I’d consider an RMA and THEN apply the latest firmware. By comparison, the main hard drive in my desktop PC which I’ve been using for about two years, and is in a machine that’s on 24/7, has 846 power cycles.

The good thing in all this is that Seagate has fessed up to this issue and has been actively aiding users affected by the problem, so big kudos to the company for that. 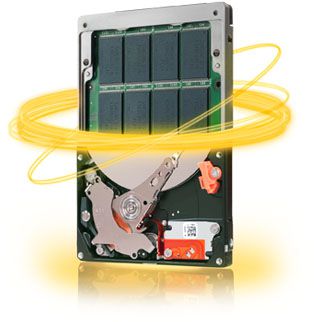 Much of the problem involves a Momentus XT feature called Advanced Power Management (APM), which automatically spins down the hard disk to manage power use and increase mechanical life span. The feature also allows the SSD to take over read requests and serve up the most frequently used data. Users on Seagate’s online forum say the problem is that the spin-down feature is too aggressive.