NAS boxes have changed a lot over the years. From dumb storage, to multi-user storage, routing and network services, to web servers, to cloud servers, to full-blown media centers and PCs that can perform all of the above. QNAP is one of the leading NAS providers and it’s now releasing a new model with a lot of functionality.

The TS-453Bmini is a 64-bit quad-core 4-bay NAS built using an Intel J3455 Celeron processor, and is an update to the 2015 model, the TS-453mini (no B in the name). It’s a 10W TDP CPU that’s built on Apollo Lake, the successor to Braswell, and is the same generation chip as Kaby Lake (but for low power devices).

Thanks to the modern CPU, it has many of the modern creature comforts such as 4K video support, AES-NI encryption hardware, and support for 8GB of RAM. Dual Gigabit Ethernet with link aggregation allows for up to 225MB/s transfer speeds – enough to handle a pair of HDDs in RAID 0. The TS-453Bmini is part of QNAP’s vertical NAS series which means top-loading hard drives, rather than from the front. 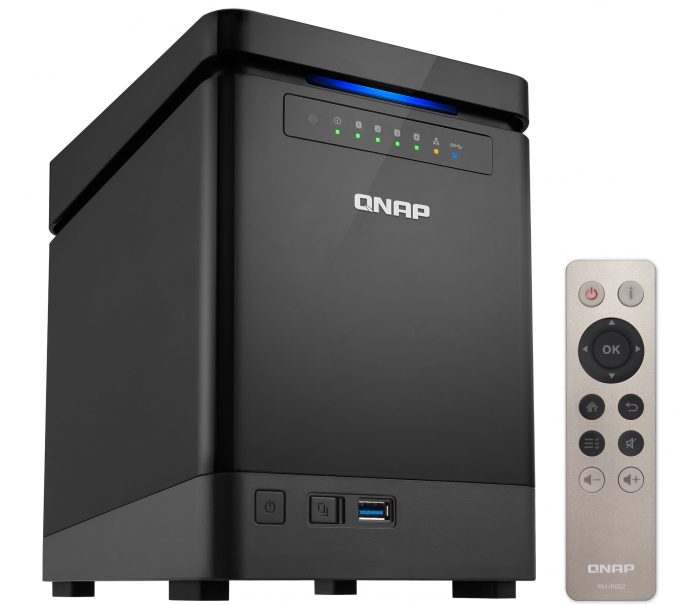 The memory module (DDR3L) is also on the underside, hidden behind a panel, so upgrades are simple as the whole unit doesn’t need taking apart. The TS-453Bmini can be expanded with an additional 8-bay storage unit to support up to 120TB of storage (4 internal bays, 8 external, using 10TB HDDs in JBOD or RAID 0 array).

There are some software tricks up its sleeve with support for various IoT applications, and a virtualization station that allows the use of different operating systems as virtual machines. Installing Linux Station and plugging in a mouse, keyboard and an HDMI display, will let you install Ubuntu and run the NAS as a PC. While not meant to be a daily driver, the installation of Ubuntu and the IoT virtual machines, is meant to empower developers to build personal clouds of IoT devices, managed from a single unit with Cloud integration. 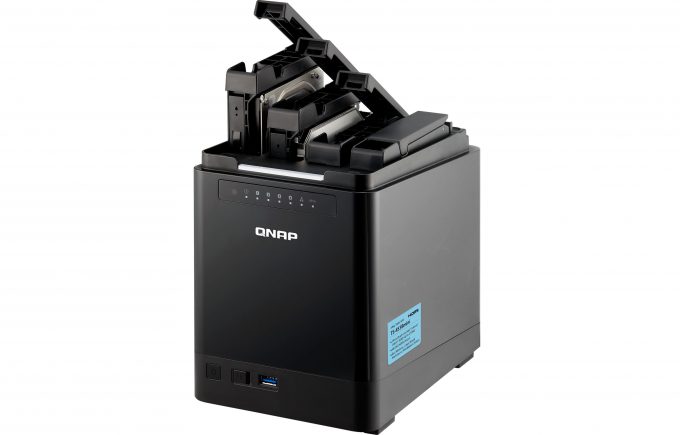 There are 4x USB 3.0 ports and a single USB 2.0 port to plug-in USB storage, wireless capabilities and enabling print sharing (plus USB keyboard and mouse support). The HDMI port supports 4K UHD but only at 30Hz, so this is likely just an HDMI 1.4 port, rather than the newer 2.0. This also means it lacks HDCP 2.2, so certain streaming services won’t work, but for a NAS, this is unlikely to be a concern. Mobile devices can be setup as remote controls too, to flick between movies and media, without a keyboard and mouse.

The usual assortment of semi-enterprise features are included, including LUN snapshots for iSCSI, Windows AD and LDAP services with ACL, and a number of backup and recovery solutions like RTRR, rsync and Cloud integration. Virtual application layers for LXC and Docker are supported too, along with virtual machine import, export, backups and snapshots.

Currently, retail prices put the TS-453Bmini at $620 from Newegg and about $650 from Amazon, but early days as the product has only just been listed. No MSRP price was listed with the announcement.